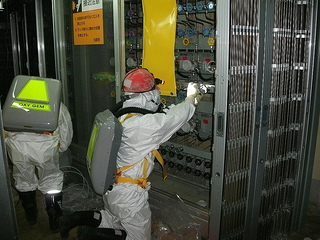 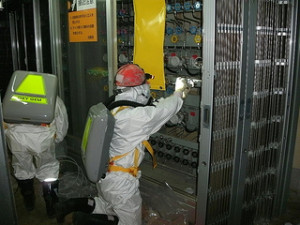 After pressure from the Health Ministry, TEPCO recalculated the thyroid doses of some workers. These totaled to 1,973 workers who received 100 mSv or more to their thyroid gland. The previously reported number was 178.

“TEPCO reported to the World Health Organization in December that only 178 workers at the plant were believed to have received radiation doses to their thyroid glands above 100 millisieverts.”

This is significant as the dose calculated to be specific to a body part has a direct impact on that body part and are considered more potentially damaging than the same dose to the entire body. In the case of the thyroid gland it drastically increases the chances of thyroid cancer.

While TEPCO doesn’t admit in their reports what the exposures over 250 mSv really were, the media documented at least two of them to have been over 600 mSv.

Other failings of the monitoring system have been discovered in the last year. A lack of body part monitoring has been a problem as was other aspects of proper monitoring that have persisted past the initial disaster response. Workers for subcontractors have also been urged to lie about their exposure doses. As part of this, an investigation in mid 2012 discovered workers had been covering dosimeters with lead plates to fake their doses so they could work longer.

The issue of exposure doses remains a current and future problem. Nothing has been done to try to correct or account for the flaws in the recording systems to assure worker doses are properly documented. Since the workers dose plays a role in any future assistance with health monitoring and medical care these numbers matter greatly. Many workers, if their recorded exposure is lower than the government threshold for assistance could be left without help, even though their real exposure could be much higher. It is also not clear exactly what assistance will be given to these workers with the highest exposures and if their medical assistance is sufficient compared to their potential health risks.

Many of the workers at the plant were also victims of the disaster. Many lost homes and family to the tsunami or the nuclear disaster.