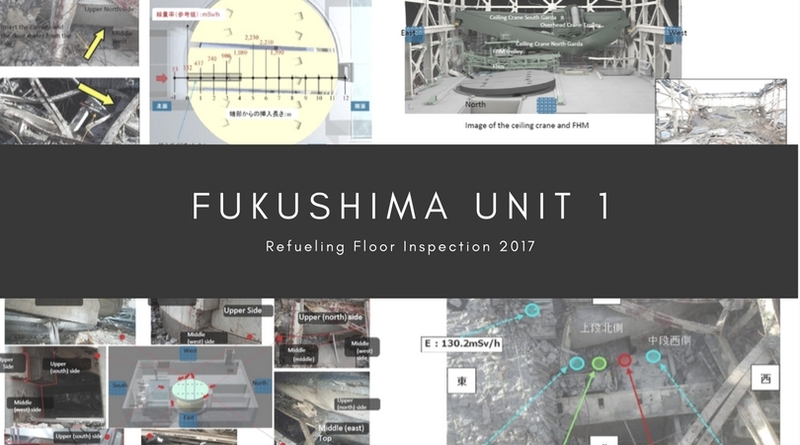 Investigations of the unit 1 refueling floor area took place between November 2016 and February 2017. This area has been of interest to determine if the containment cap leaked and also the conditions of the spent fuel in the pool. Diagrams are machine translated, please refer to the original Japanese document if there is any question.

The concrete and steel roof fell onto the refueling floor during the 2011 meltdowns. This has complicated efforts to characterize the conditions in the area. A scope was used to look under the roof panel. Findings from this and earlier efforts to view the refueling floor discovered that the concrete reactor well cover sections were pushed up and sideways out of the well. These new inspections found they were more dislodged than initially thought. 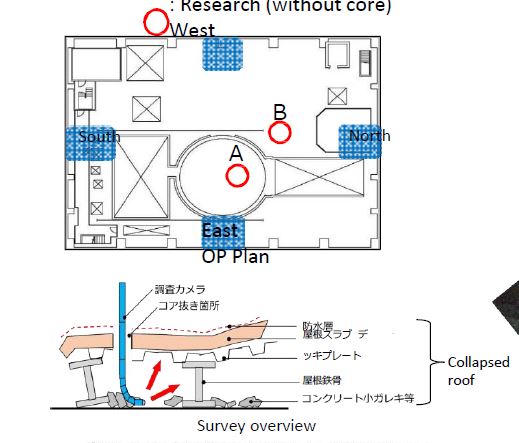 The diagram above shows the method and location of the scope inspections. Red circles indicate the inspection locations. 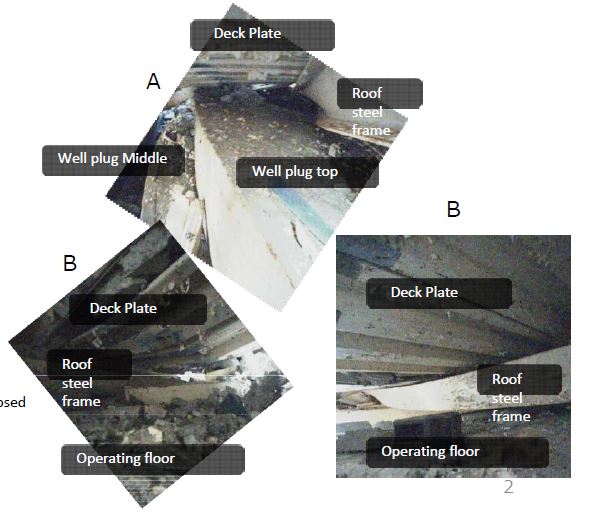 The 3D visualization of the refueling floor (below) with the roof panel absent shows the configuration of the damaged equipment. The large overhead crane and the fuel handling machine are both located over the spent fuel pool. This may make removing these cranes problematic. A method to remove the cranes without any portions falling further down or into the pool will be required. 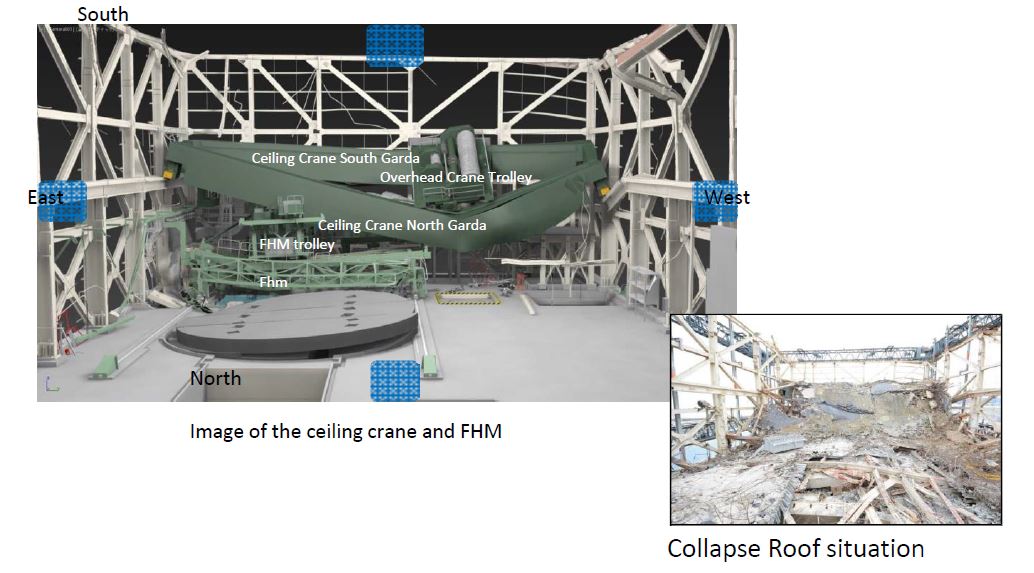 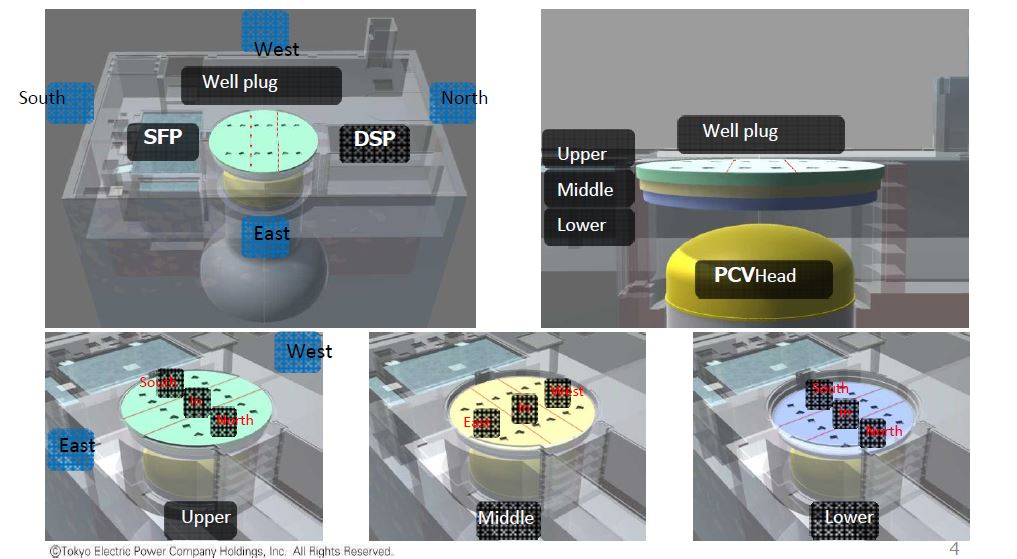 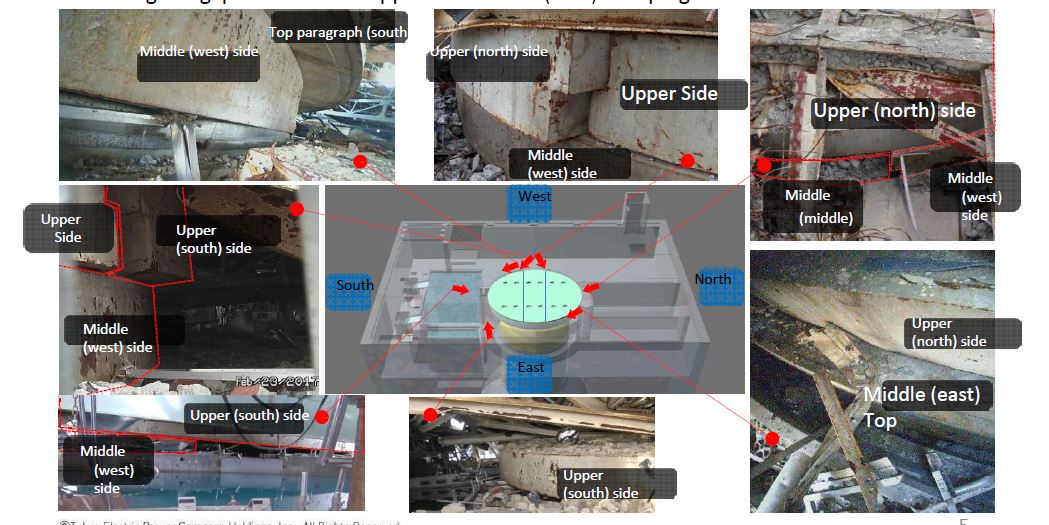 A scope was placed below the top layer of the concrete cover sections (below). They discovered the middle layer to be dislodged partially upward and partially downward. The lower layer has fallen in onto the containment cap. 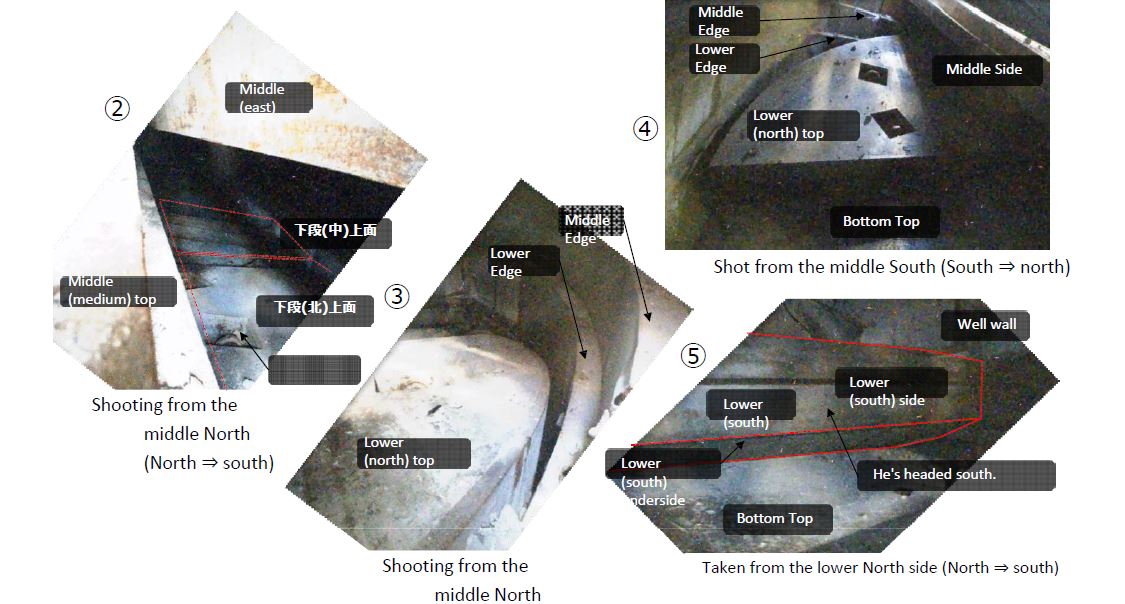 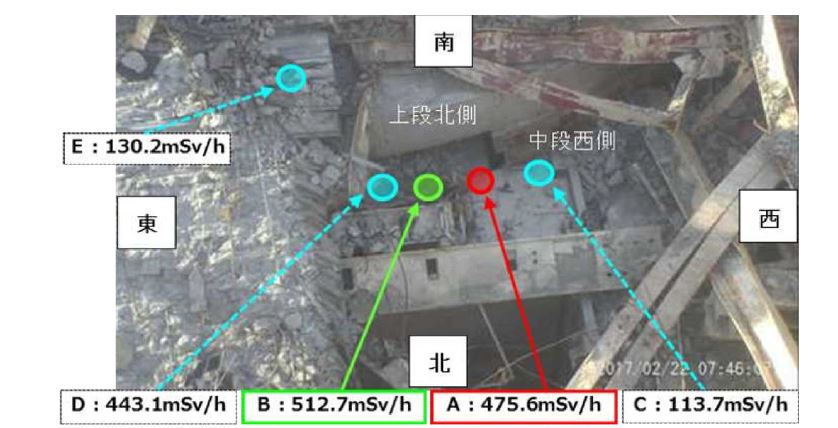 TEPCO also published a set of readings from under the top layer of concrete sections. It flagged these as “reference” readings. TEPCO added that there would be additional investigation of radiation readings in this area so these readings may be over-ridden by newer, more accurate data. What these readings do show is a gradually increasing radiation level towards the center of the reactor well. This would be expected due to radiation from the reactor vessel itself. What is of note is that they are not finding extremely high radiation levels by comparison around the outer edges of the reactor well. That situation would indicate a failure of the containment cap seal.

From the gathered data it appears that the containment cap of unit 1 did not suffer a gross failure. There is a known phenomenon where the containment cap under high pressure and heat can temporarily lift and release steam and gasses. It is not clear if this took place at unit 1. The lack of high levels of contamination around the peripheral areas of the reactor well make this behavior less likely.

Work to clear off unit 1’s refueling floor has been going extremely slow. TEPCO has been taking extra steps to avoid releasing building dust off site. This may be contributing to the slow work. It is mentioned in the report that they were slowly removing the roof slab sections as the slab has broken down into small pieces of debris that need to be vacuumed from the area before further work can take place.

They have apparently done some preliminary inspections of the surface of the spent fuel pool. The timeline table of completed work mentions this being done. It is noted that the skimmer tank for the spent fuel pool contained water.

TEPCO provided no time table for future work in this area within this report.

The new findings are useful. They show significant dislocation of the reactor well cover but no serious failure of the containment cap. This new information may help narrow down the events during the meltdowns and the process of how the reactor and containment failed.

Oi Reactors Will Have To Shut Down Sept 2013, Restart In Question