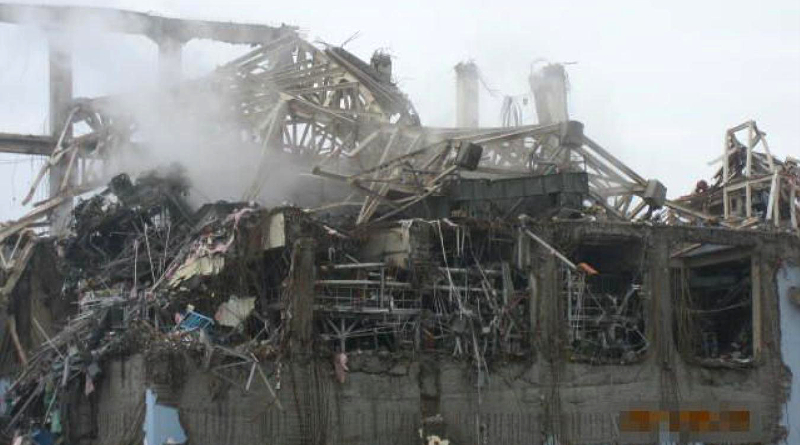 This is a continuing report on the new findings for the reactors at Fukushima Daiichi from the recent NDF Conference. We have broken down this information by reactor unit due to the size. This article focuses only on unit 3.
Reference document 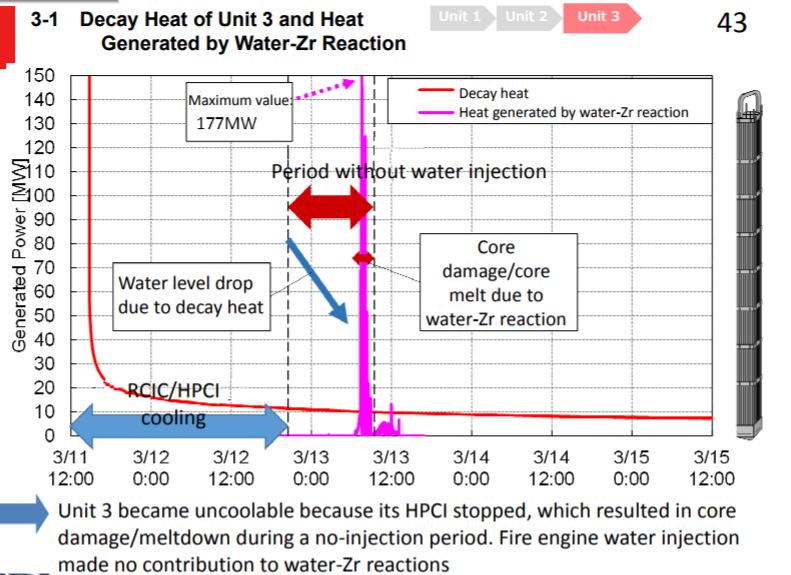 Per our unit 3 timeline records these data points are relevant to the above graph.
Reactor 3 exploded March 14 at 10:23 am
Containment spray started March 13 at 8:55 am
Note on the graph that Fire engine water made no contribution.
Vented unit 3 containment 4 times between core damage and explosion on 14th
Containment spray was conducted only at unit 3. TEPCO has not explained if this was a choice at unit 3 or if unit 3 was the only unit where this function was an available option at the time.

The visual evidence to date showed that unit 3’s reactor vessel failure was not a gross abrupt failure but was a set of small failures in the reactor vessel bottom head that allowed molten fuel to drop down into containment at what was likely a slower rate. The role water in containment may have played in this may be a critical factor towards understanding the events at unit 3 including the large explosion.

Containment spray estimates based on known data from other reactor units and general system capabilities:
10 liters per second for 1 hour (water into containment)
60 seconds in one minute = 600 liters x 60 minutes 36,000 liters 9510 gallons
aka 35 cubic meters of water
Water would have flooded containment floor, then the torus tube, then backed up into the drywell/containment floor to flood further
For comparison, this tanker trailer pictured below is 35 cubic meters in capacity: Unit 3 specifications:
Containment space volume:  D / W space: 4240 m3 , S / C space: 3160 m3
Suppression pool water: 2980 m3
The combined total space of the available space minus existing water of the suppression chamber and the drywell space would make 35 cubic meters of water create a small contribution attempting to fill the containment structure. The drywell space would have part of its volume taken up by various small structures and piping.

・Assuming the energy amount from PCV pressure increased due to hydrogen generation, most of fuels are estimated to have melted
・Since no temperature increase was observed in each part of RPV when injection from CS system was stopped from 9 to 24 in December 2013 (keeping constant total flow by increasing flow from FDW), the amount of fuel debris in core is estimated to be small (smaller than that in Unit 2)

・Because temperature at RPV lower head dropped when water injection from CS system started (September 1, 2011), fuel debris is estimated to in lower plenum

This is the one location where it is assumed there might be fuel debris residues.

・Possibility of part of fuel debris solidified without causing MCCI
・Lower part of pressure vessel can be damaged because MCCI is considered to occur
・In addition to Unit 4, Unit 3 also experienced an explosion to which hydrogen generated by MCCI could possibly have contributed

The recent visuals obtained with the swimming robot used to inspect unit 3’s containment may have helped create these estimates. Images of some fuel debris that appears to have dropped then quickly solidified in the pedestal area were unlikely to have reached the concrete surfaces. The large volume of hydrogen assumed to have built up in unit 3 and migrated into unit 4 would have required a considerable capability to produce hydrogen.

・Meanwhile, DW spraying was performed for more than 1 h from 7:39 on March 13 in response to the accident. Diffusion of fuel debris could have been suppressed considering a water level on DW floor during pressure vessel breakage.
・Estimated that fuel debris diffuses outside the pedestal through the pedestal opening but has not reached shell attack
・If water is pooled on PCV floor, particulate debris can be formed.
・Possibility of accumulation in stagnant spot when there are particulate debris

Particulate debris is more subject to breaking apart into fine materials. This makes it more likely to be leaked out of the reactor containment through various mechanisms. If there was sufficient water in containment to create particulate debris this could have also contributed to hydrogen generation and criticality risks.

•Assuming the energy amount from the increased PCV pressure by hydrogen generation, it is estimated that most of fuels have melted

The final muon scan published after this NDF report confirmed there is little to no fuel left in the reactor vessel. 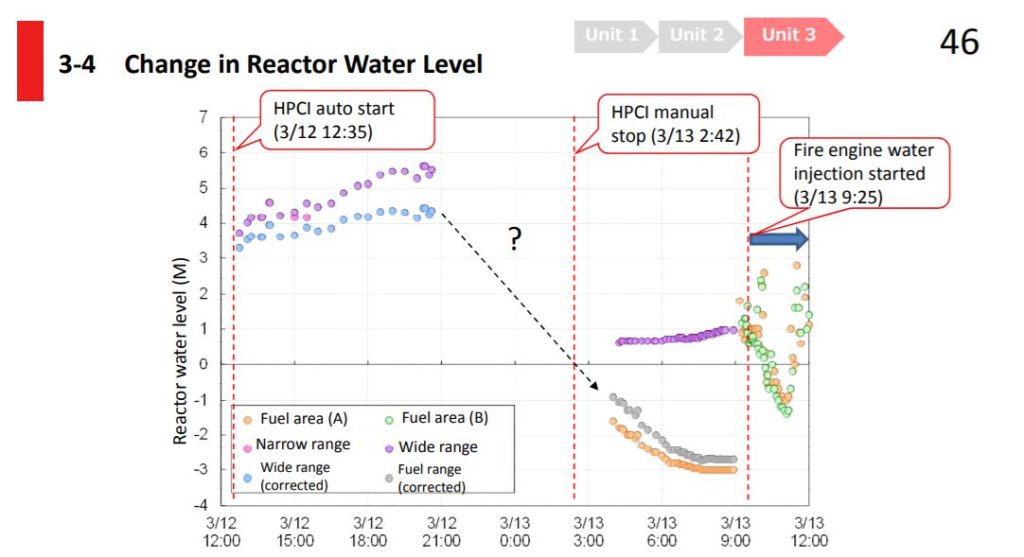 ・Before HPCI was manually stopped, the reactor pressure was lower than the HPCI operable range and the HPCI discharge pressure was also low, which suggests a possibility that water injection into the nuclear reactor could be insufficient before stopping HPCI
・Fire engine water injection started at 9:25 on March 13, damage to fuel is considered to have progressed during the period when injection was not allowed.

The HPCI system was the only cooling water system remaining after the RCIC system died on March 12th. These problems with the HPCI may have been the critical turning point where unit 3 began to catastrophically fail. 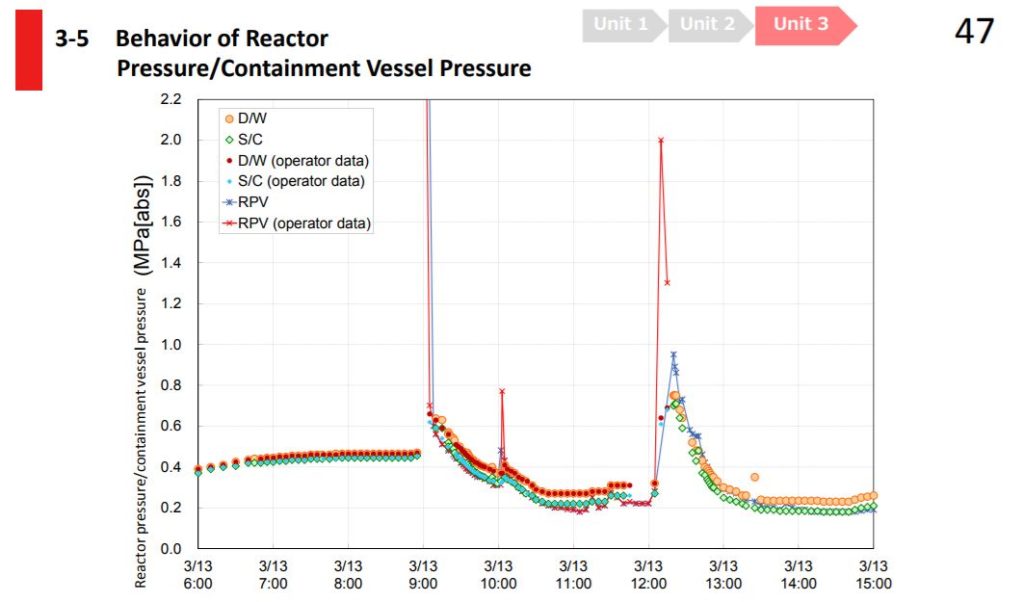 At around 9 o’clock and past 12 o’clock on March 13, 2011, the containment pressure has increased significantly. Like Unit 2, this could be caused by a large amount of hydrogen generated there and most of the fuel could have melted.

There was a spike in containment pressure post 12:00 noon on 3.13. Core melt took place prior to 12:00 noon on that day. The earlier spike at 9 am may have been related to cooling injection loss and the attempt to use the containment spray system. Around the same time we noticed the opening of the steam relief valve (SRV) as documented in some of the post disaster accountings. This valve releases steam from the reactor vessel into the suppression chamber (SC) torus tube. This may have contributed to the increases in pressure around this same time.

*** 9:08am March 13 battery assist SRV opening about the same time both RPV pressure readings went off the charts then back down. Batteries were scavenged from employee cars to do this.
http://www.tepco.co.jp.cache.yimg.jp/en/press/corp-com/release/betu12_e/images/120620e0104.pdf

“The ERC Recovery Team at the power station was in the MCR, connecting batteries to circuits to power the SRV. It was then that operators discovered the reactor pressure decrease. The SRV opened, allowing rapid reactor depressurization to begin around 09:08 on March 13 (batteries connected to circuits were later connected to the control panel, allowing SRV to be opened and depressurization maintained).”

The SRV opening at 9:08 lines up with the off the charts RPV pressure and abrupt drop in pressure.
The 12 noon increases in RPV pressure roughly matches the time where they may have run out of fresh water to inject by fire line then needed to switch to sea water. If they had no cooling injection during that period of time it may have played a role in the RPV pressure increase.

Also cited in the report where they consider the relatively high water level in containment as proof that the “shell attack” did not happen. This refers to the behavior where molten corium can reach the edge of the containment floor and burn through the narrow portions that hold less concrete. So far evidence from the torus room would appear to back this up as no burns, heat or steam damage or water leaks were found. The entire torus room has not been inspected though, based on data made public to date.

In Unit 4, hydrogen explosion occurred in the reactor building around 6:14 on March 15. The vent gas of Unit 3 is considered to be getting into the Unit 4 reactor building.

TEPCO has shown that hydrogen from unit 3 likely did leak back into unit 4 via the venting and standby gas treatment system filters. They found higher contamination on the down stream side of the unit 4 filter bank than was found on the up stream side. This seems to indicate contaminated air including high concentrations of hydrogen were pushed into unit 4. It is possible that the over heating in unit 4’s pool also contributed some hydrogen to the situation but was likely not the only source. Later investigations of unit 4’s pool showed heavy oxidation on some fuel assemblies that match the hottest portion of the spent fuel pool during the disaster as identified by US Air Force drones.

Unit 3’s NDF report did not hold any major new surprises but it does seem to help confirm some earlier assumptions and speculation. Understanding the events that took place inside unit 3 will still take time to fully understand as much more investigation is needed to truly grasp the events and damage at this unit. 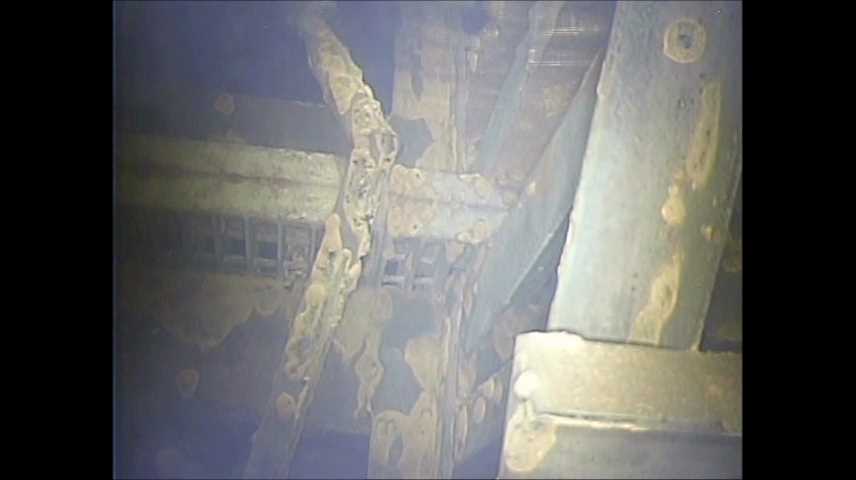