Introduction: Analysis of this document began under the premise that MOX fuel could in no possible terms be viable and intact after spending a period of 10-11 years in the spent fuel pool.  Documents show that 32 Mixed Oxide Fuel Assemblies were manufactured and sent to Fukushima-I in 1999.  These fuel assemblies were then stored in the Spent Fuel Pool of Reactor 3 pending local government approval.  This approval did not come until late summer of 2010, at which point arrangements were made and the fuel assemblies were loaded into Fukushima I-3 in September 2010.
http://archive.greenpeace.org/pressreleases/nuctrans/2001jan28.html
http://www.ens-newswire.com/ens/dec2000/2000-12-29-11.html
http://www.nuclearconsult.com/docs/consultationNCG_Submission_to_UK_DECC_Plutonium_Consultation_2011.pdf&#8221;

Shift of Focus (as it pertains to analysis of Tepco document): Upon periphery work in translating this document, it soon became evident that Tepco was not just seeking approval to install 32 MOX fuel assemblies into the core of Reactor 3 at Fukushima – I.  It appears that they were intentional about taking it a step further and in fact seeking approval for a quick transition to a 1/3 MOX core at the NPP in question.

Below is an excerpt from pages 5-6 of the translated document for consideration:

Taking into account the impact on the reactivity of the fuel and the characteristics associated with changes in fuel composition will be required to meet the following criteria characteristic of the core nucleus.

Is planned core was loaded with MOX fuel in 25 cycles in a cycle following the Unit 3 nuclear power plant Fukushima Daiichi, and MOX fuel since it is expected that the use of three cycles from 25 to 27 cycles of have been evaluated for the core.

As shown in Table 4.1-2     25 cycles first body 32 in the long-term storage, 26 cycle, the second body 32 of the pending inspection bodies imported fuel, to 27 cycles first new fuel MOX body 80 of the number of body replacement is assumed in the equilibrium core has been evaluated as being loaded with the new.

(Babel Fish Translation for comparison)
＊2：The number of bodies of all fuel assemblies in the core is the body 548.

Talking Point 1:
When looking over this rough translation and table 4.1-2 in particular, the supposition that Tepco was indeed looking at a short term goal of a 1/3 MOX core loaded in Reactor 3 is reinforced.  Taking careful note that there remains to be imported MOX fuel (Nov. 14, 2000) in water cooled storage somewhere pending import inspection.

Talking Point 2:
Information with regard to the operational period of each cycle is given (via google translate) in ambiguous terms.  We can, however, begin with the idea that every 18 months 1/3 of the MOX fuel loaded has to be replaced because it has lost efficiency.  http://dcbureau.org/201103141303/Natural-Resources-News-Service/fission-criticality-in-cooling-ponds-threaten-explosion-at-fukushima.html

Conclusion:  The author of this analysis concedes that “google tranlate” does not offer the best when considering technical documents. 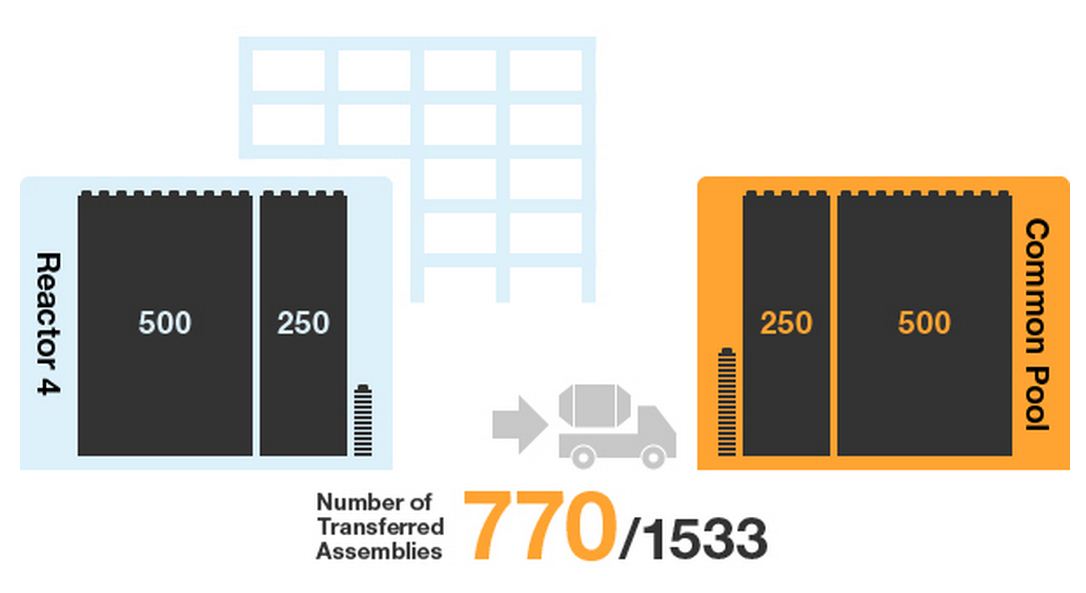