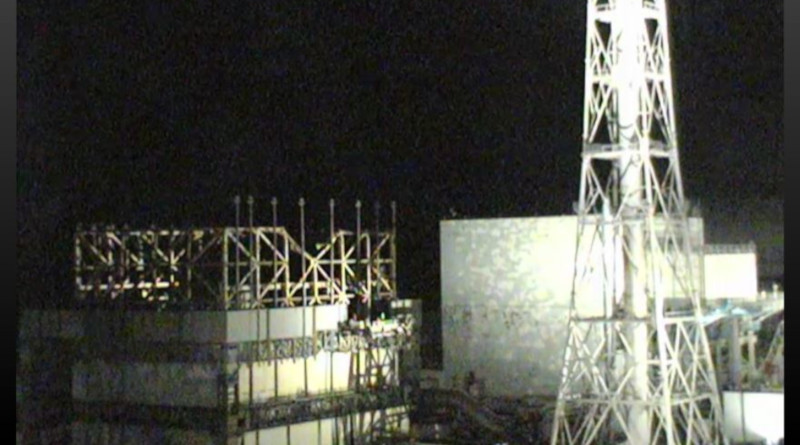 A number of new events tied to unit 1 have taken place. These lend new insight into the initial disaster while providing a better understanding of what it will take to clean up the remains of this reactor. Work here has proven much more challenging than originally advertised as highly radioactive dust and fine debris has caused multiple work stoppages. This concern with dust releases both in and outside the containment structure of unit 1 shows why TEPCO was so quick to throw a temporary cover over unit 1 soon after the disaster.

The focus of TEPCO’s recent work as been almost exclusively at unit 1. This work includes further investigation of the reactor well, the spent fuel pool, preparatory work for containment inspection and a cooling water test. The work on the refueling floor is in conjunction with efforts to remove the remaining debris from the top of the building.

TEPCO discovered some small pieces of building debris between the two gate doors and a piece of damaged hand rail above. Neither are considered a problem related to future work. Anti-float bolts that prevent the gate from dislodging were broken but the gate remained secured.

In the image below, the two gate doors can be seen, identified by the pair of round loops on each. A section of hand rail can be seen draped over the gates. 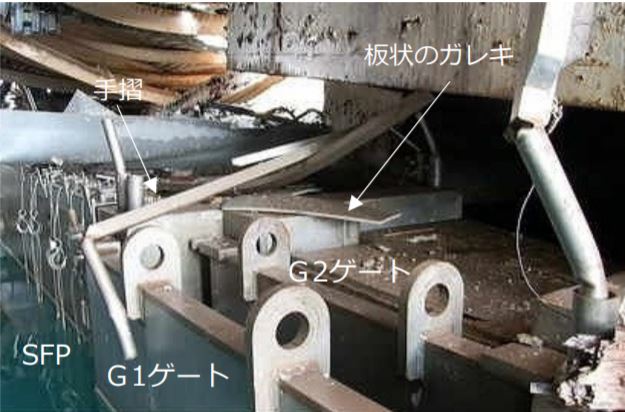 Small debris between the fuel gate doors can be seen in the photo below. 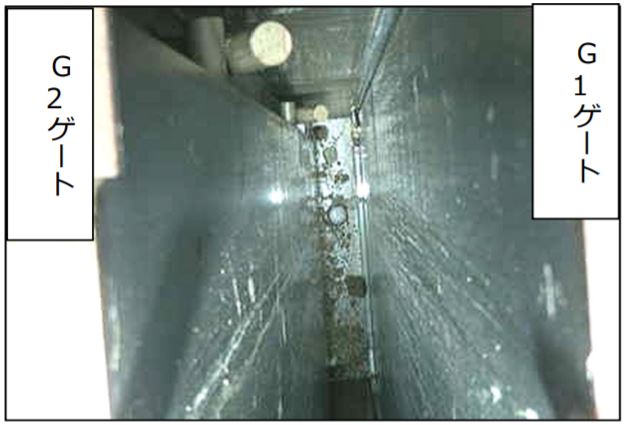 Anti float bolts seen in red dashed circles did sustain damage but the gates are still in place. 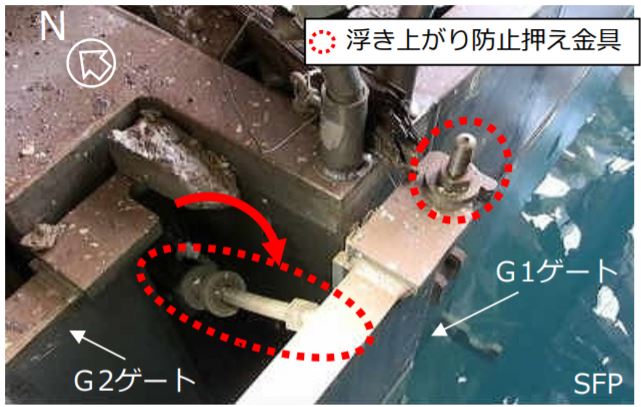 A second view of the anti-float bolts. 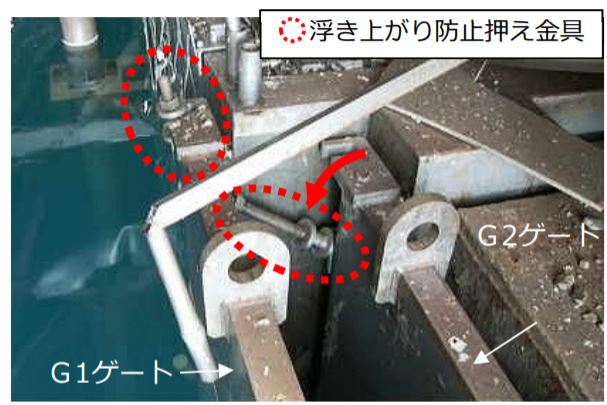 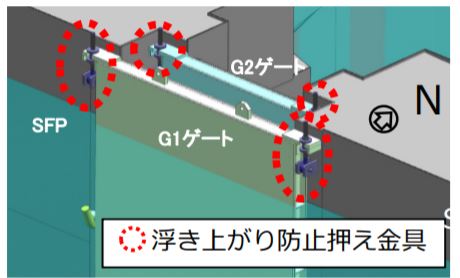 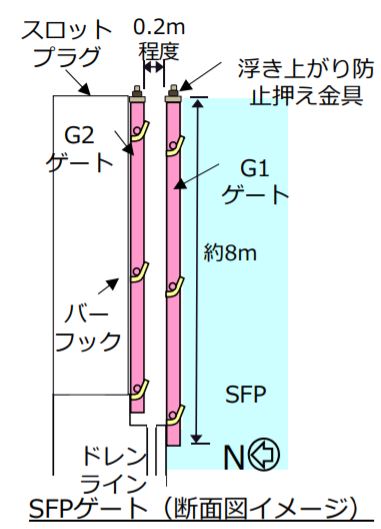 The 3D imaging resulted in the 3D diagrams below. They were able to determine the exact location of each of the slab sections for the reactor well. This helps further understand the explosion at unit 1 and will assist in determining the safest way to remove the slabs in the future. 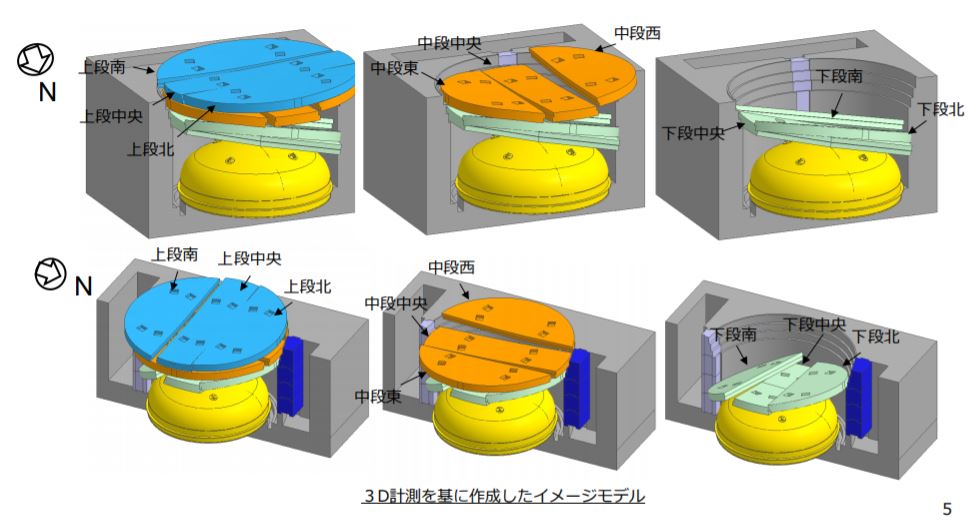 Smear collection in the reactor well was conducted. The posted results for Cesium 134 & 137, Cobalt 60, Sb-125 (radioactive silver) and a generic alpha radiation were provided. These are the isotopes they tested for, this does not mean these are the only isotopes present. Alpha radiation typically includes radioactive isotopes of uranium, plutonium, and americium. These are of particular concern as they pose a significant internal radiation exposure risk if they are inhaled or ingested.

Locations on the diagram correspond with numbers in the table. Radiation levels from the swipes do not seem to indicate a specific uniform pattern. 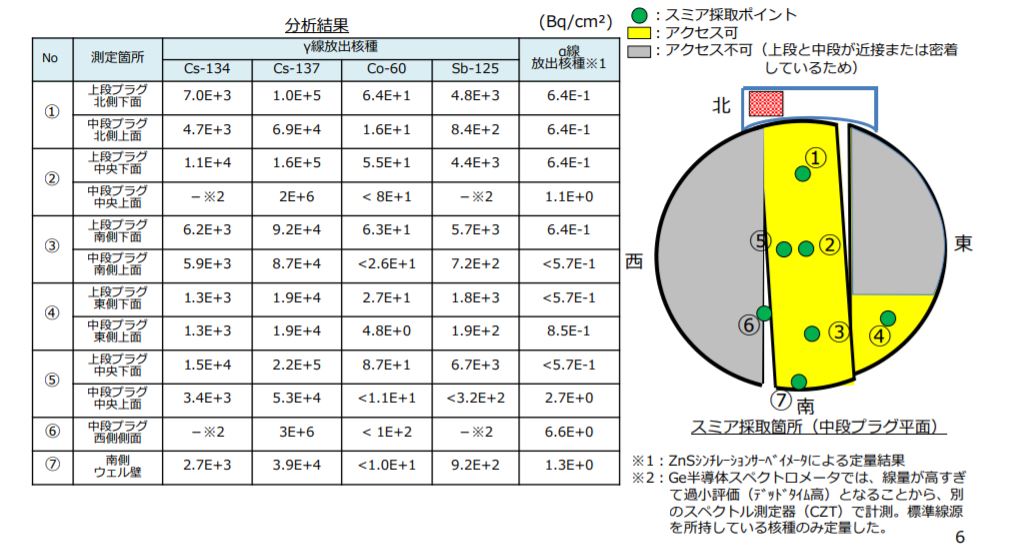 The 3D graphic below shows the location of the overhead crane, the fuel handling crane, the reactor well covers and their relation to each other. The overhead crane is partially sitting on the remains of the refueling floor control room as can be seen in the right side of the photo. The overhead crane consists of two long girders that run on a track located on either side wall of the building. The lifting trolley portion of the crane suspends between the two girders. One of the girders is significantly damaged and bent. 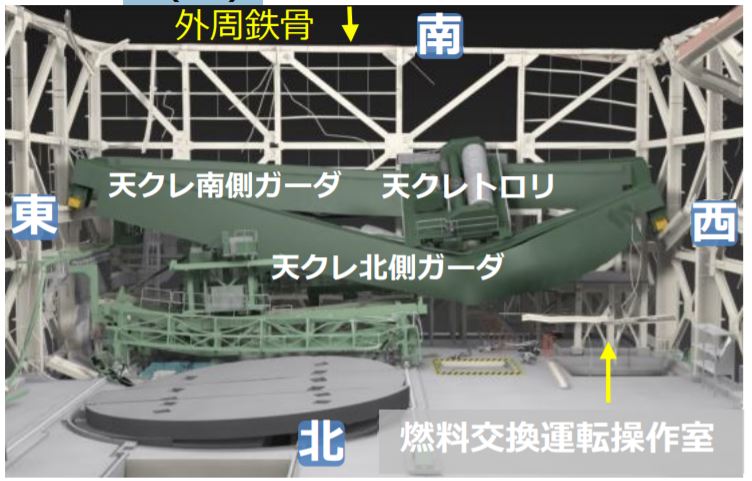 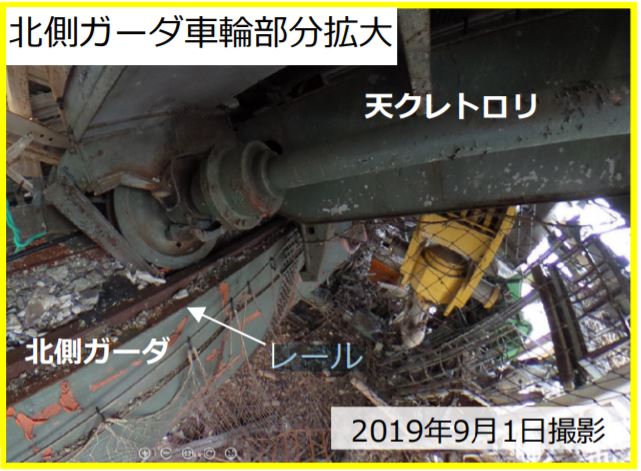 The image below shows the underside of the overhead crane. The other side of the trolley is resting on the crane girder. The girder circled in yellow in the lower left shows significant distortion. The welds that give the girder its box shape have given way in the areas of distortion. While heavily damaged, it appears to be in one piece. This should facilitate later removal. 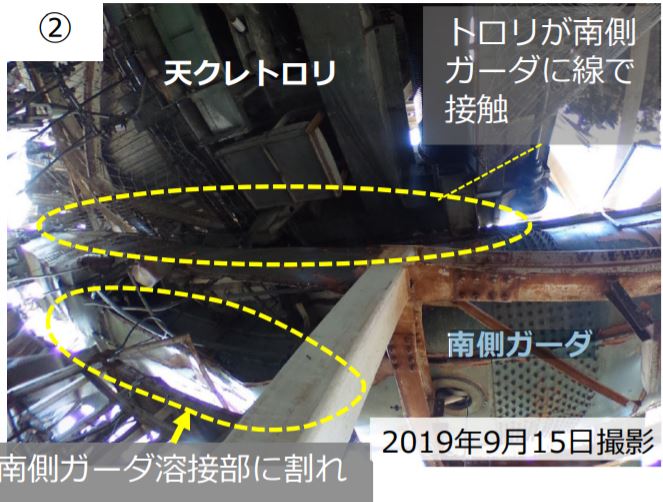 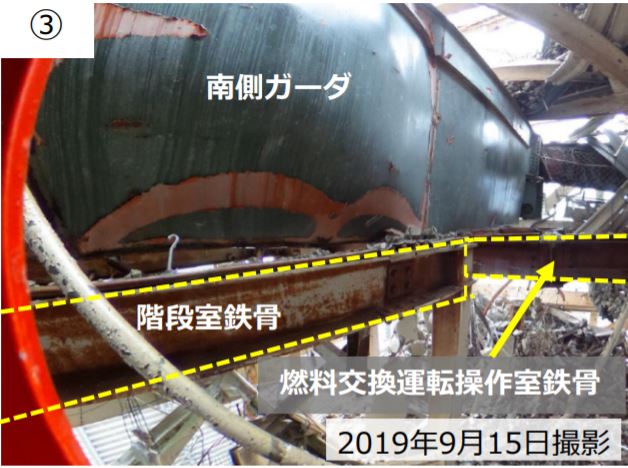 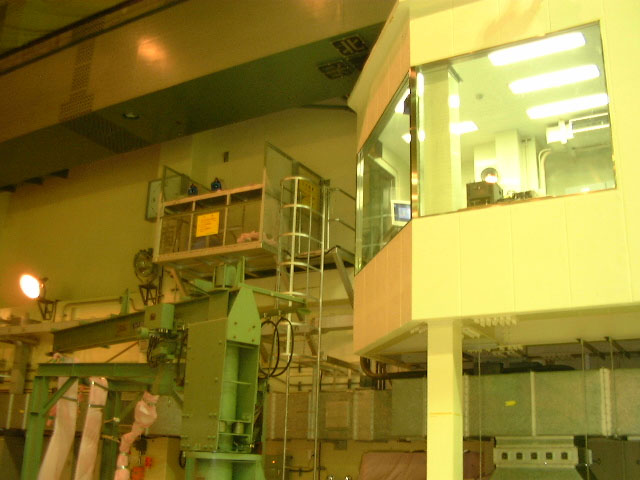 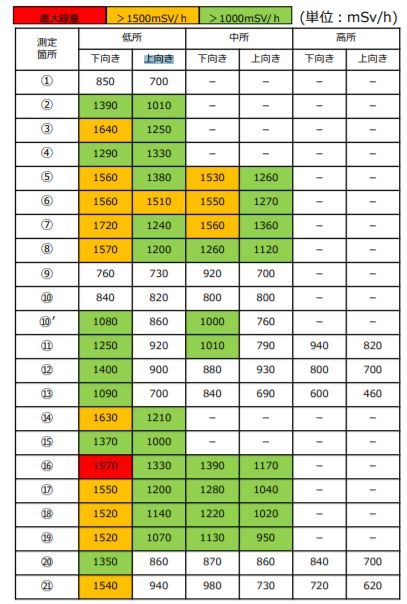 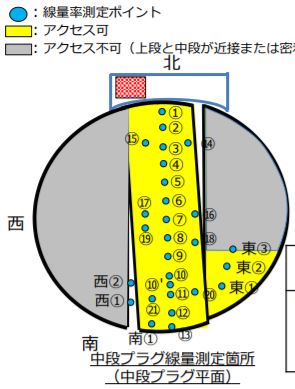 The table below corresponds to other peripheral locations that can be matched to the reading location map above. Readings are low-medium-high, indicating the distance they were taken at. The highest reading was taken in the lower right corner near the edge of the reactor well. The highest reading here is still lower than the red or orange readings on the previous table.

The locations where the depth readings were taken can be seen in the map below. An instrument was dropped down through the gaps in the reactor well slabs while taking readings at specific intervals. 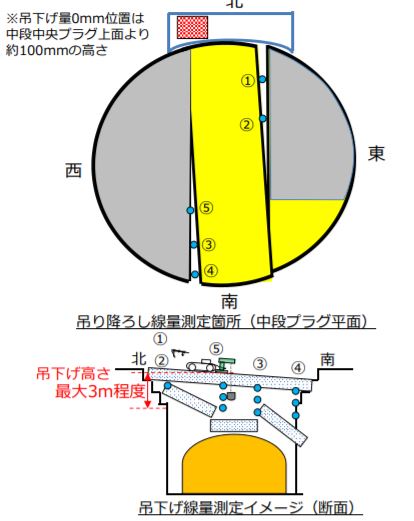 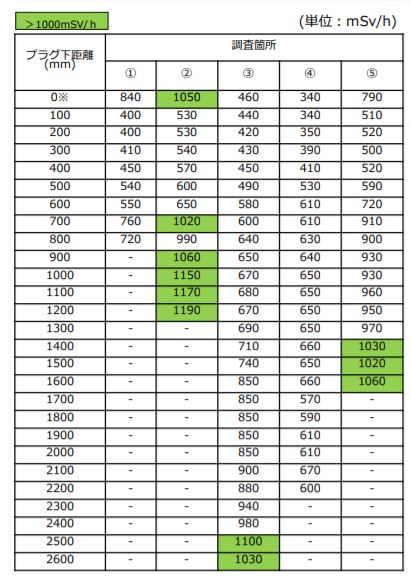 The 3D renderings below show the amount of deformation and the length of the deformation for each concrete slab identified. This deformation may influence the integrity of each slab. This will be important when considering the removal of individual slab sections in the future. Each large slab will need to be removed either as an entire piece or will need to be cut into sections then removed. All of this includes the increased complexity due to radioactive contamination. The area below the slabs will have considerable contamination and may include radiation “shine” where direct exposure to gamma radiation can be an increased risk. If the containment cap has failure points, this could expose a path directly into the containment structure. 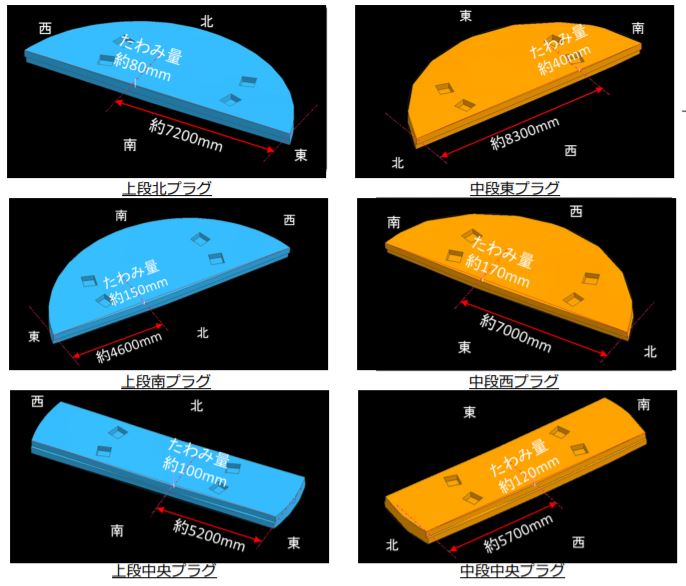 Radiation Dose Rates At Surface Of Reactor Well
Readings were taken under the top slab. The gray box shows the length of actual inspection. Some readings are estimated. These again show highest readings toward the center of the reactor well. 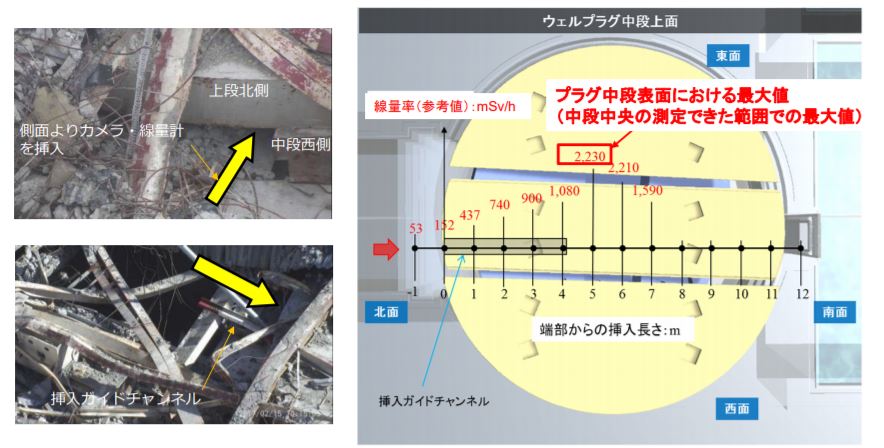 This information is useful should there be a need to stop water injection due to another problem or in the case of a subsequent on site disaster. At least for short periods of time, the lack of water injection didn’t cause any surprises.

The graphic below is TEPCO’s projection of what would take place as they reduced and then stopped water injection. 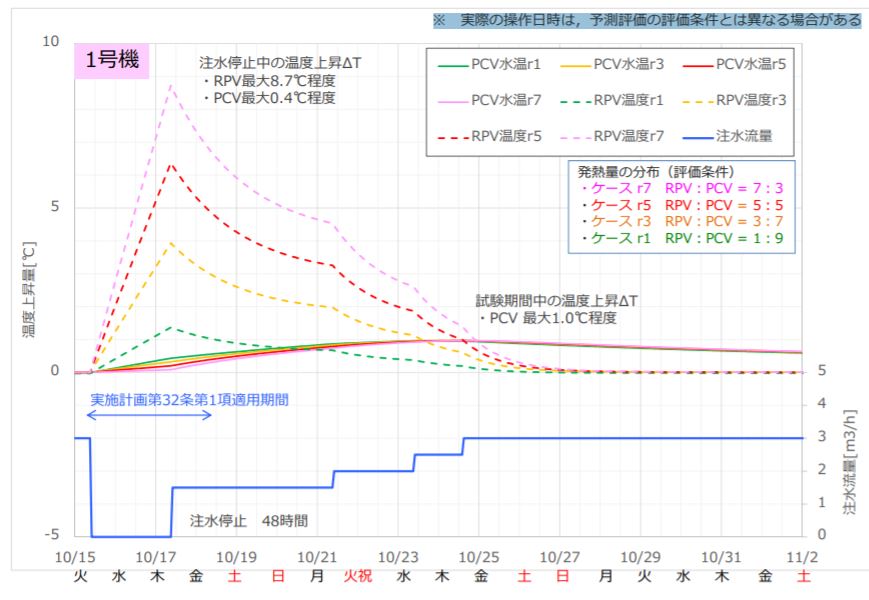 Work has been ongoing since spring 2019 to cut an access hole into unit 1’s containment. The former personnel access lock was selected as the site for this inspection work. This access point consists of two pressurized steel doors. TEPCO has been cautious about disturbing radioactive fine debris inside containment.

Work to resume cutting the inner door into containment for the upcoming inspection is planned to resume in early November. Before cutting work resumes workers will need to depressurize containment. This took place for the previous cutting work. A constant negative pressure is kept on the reactor containment structure to prevent fine radioactive debris from leaking out.

More updates on unit 1 are expected through the rest of 2019. TEPCO has been pushing to complete tasks at unit 1 before the start of the Tokyo 2020 Olympics. We will provide updates as new information comes out.

What Else Is TEPCO Not Telling 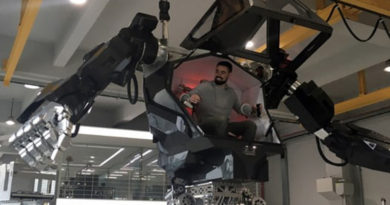 Are Mechs Going To Fukushima Daiichi? Probably Not