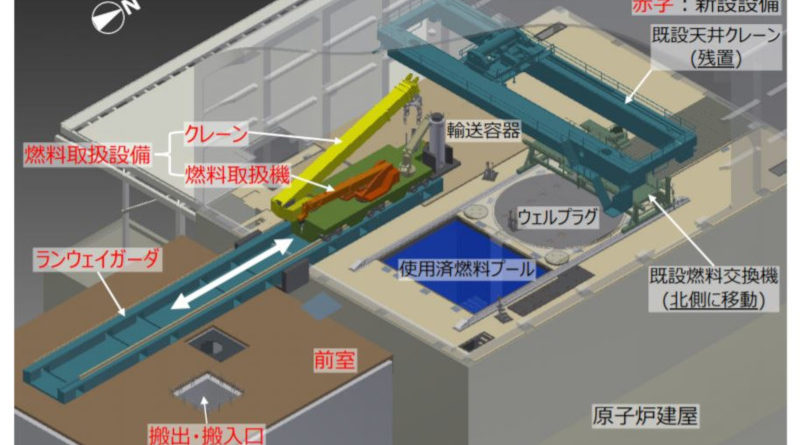 TEPCO and the NDF have released documentation describing their plan to remove both the spent fuel and at least some of the fuel debris from unit 2 at Fukushima Daiichi.

A group of options have been floating around for years. This had been narrowed down to two options more recently. Now a single option has been selected as the best plan.

The key feature of these plans involved how they would gain access to the refueling floor of unit 2, to remove the spent fuel. One plan involved tearing down the entire refueling floor roof and walls, then installing a fuel removal building over the top, similar to units 3 and 4. Another involved only removing the roof to gain access. The third involved no dismantling of the current building. This third option won out. Why it won out and how this leads to future developments is a significant step forward for this work. 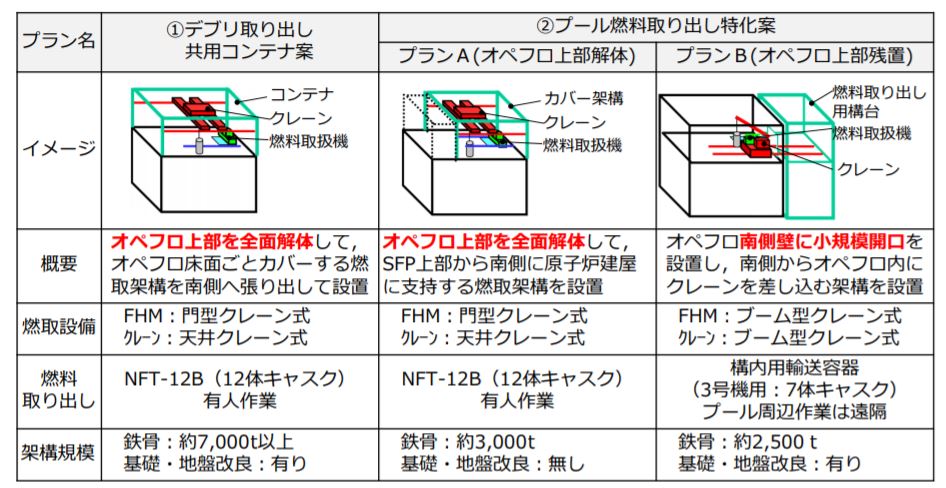 This new plan has also morphed into a plan for removing some of the fuel debris through the same refueling floor facility.

Radiation levels on unit 2’s refueling floor have been high since the disaster. This has prevented any direct entry by workers. In the last year, efforts to remove small pieces of equipment and decontaminate the refueling floor by remote equipment has been ongoing. This recent work was aided by the addition of an air lock building tied to the side of unit 2. 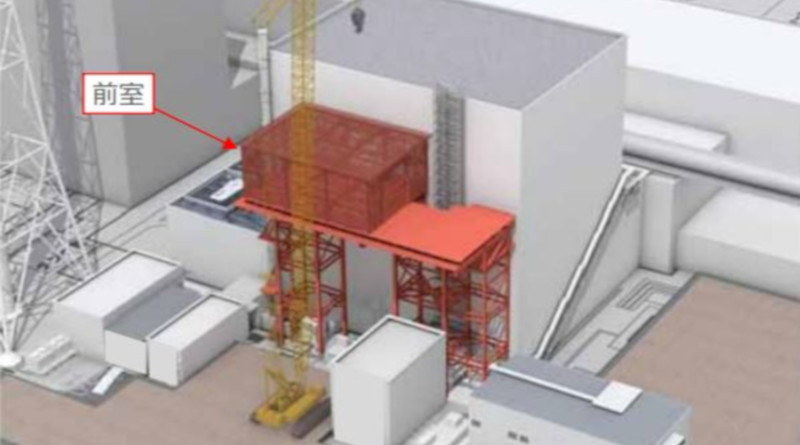 What is the new plan?

This new plan avoids removing the roof panel. TEPCO describes the new spent fuel removal equipment at “miniaturized”. Instead of installing a new overhead crane and a fuel handling crane, this new system uses a small floor mounted boom crane to do all of the tasks on the refueling floor. A small doorway would be cut in the concrete wall in a location between two of the wall columns, avoiding any structural damage.

Four issues have been identified related to spent fuel removal.

Previous concepts to remove the roof and walls raised serious concerns about this work releasing radioactive building dusts into the environment. Radioactive dust from similar work at unit 3 was found as far away as Miyagi prefecture. Since these dusts can contain alpha radiation and reactor fuel microparticles, they pose a significant risk. With the chosen plan the only new hole in the refueling floor would be a passage door for the boom crane to send spent fuel shipping containers through to remove them from the building.

A reduction in the radiation levels on the refueling floor and the addition of shielding in the refueling floor level have improved conditions. These actions have made the area potentially safe for very limited human entry. TEPCO claims workers could enter for short periods of time to do work that requires human intervention.

Rainwater infiltration is always a concern. Rainwater can potentially flush radioactive dusts out of the reactor building. It also has the potential to damage equipment that currently functions inside unit 2.

On one side of unit 2 is the ongoing work to remove the units 1-2 vent tower. This ground based area is not available for the fuel removal work at unit 2. The opposing side has been selected for this fuel removal plan. 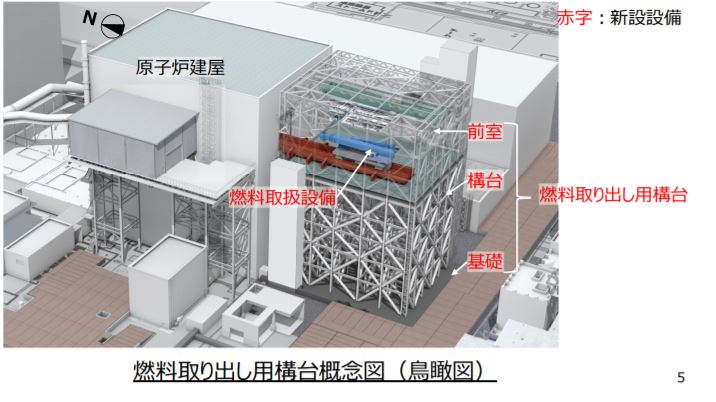 The design outlined in the above image shows the cask being removed on a rail from the refueling floor to the additional building that would be constructed. 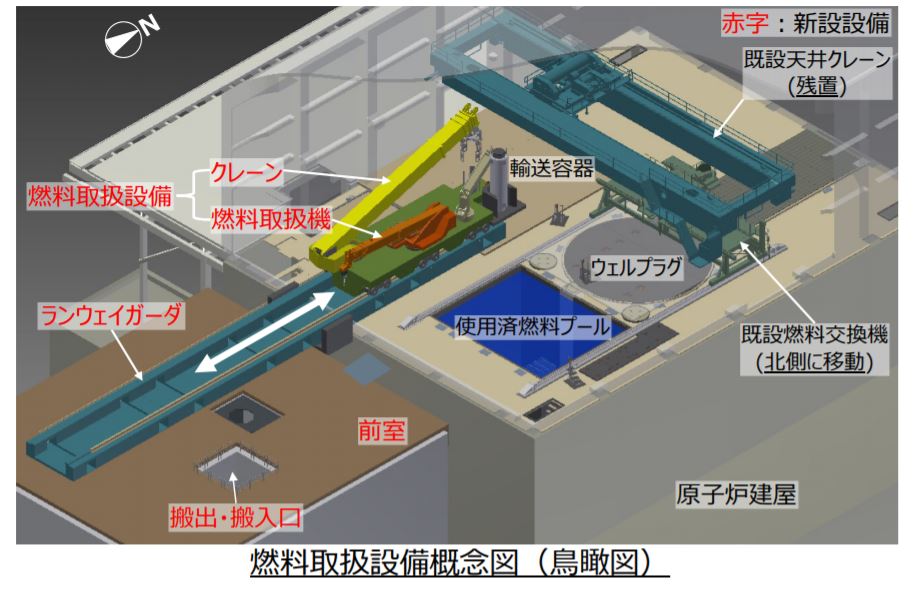 The set of new boom cranes on a rail would be used to handle the fuel within the pool, remove fuel transit casks, and send them down the elevator shaft of the new building.

Both the old overhead crane and the fuel handling crane will remain inside the refueling floor. The overhead crane is currently in the position noted in the drawing. The fuel handling crane will need to be moved to a location over the reactor well. This will require some method to move the crane as all of the electrical systems on board are damaged.

The cask as pictured in the first drawing is a new cask type. This cask is significantly narrower than the standard transit casks used for fuel removal at unit 4. The change in cask would be needed due to the smaller boom cranes that will be used to transfer the cask.

This new concept has also raised the potential of using this same system to remove fuel debris from the reactor vessel. TEPCO admits that concept is only in the early investigation stage but there is potential to repurpose this equipment once the spent fuel is removed.

NDF explores this plan in more depth. They include the potential to use this equipment for some of the fuel debris extraction. NDF stresses that this concept design has yet to be confirmed.

Plan 1: Plan to share the extraction container of pool fuel and fuel debris

Plan to install each structure individually

This is somewhat vague but establishes the rough plan to repurpose the spent fuel removal equipment.

NDF cautions that the spent fuel removal portion of the concept must include precautions against earthquakes. They also suggest that the new crane concept be tested as a mock up before installation in unit 2. A plan for maintenance and repair of the crane system is urged along with a plan for human intervention if needed. This would include proper shielding for workers to enter the building. Most maintenance work could be done by moving the boom crane rig to the new building. This would lower worker exposure levels. Direct work on the refueling floor could still be a possibility should there be an equipment malfunction.

This plan is a major development. It removes the potential risk of more building demolition on site, something that has been a major concern. There is now a clear path forward for spent fuel removal. The installation of the air lock building and now this plan for another building to handle cask removal both set the stage for future fuel debris removal.

Both the TEPCO report on this work and the NDF report are included in this document
https://www4.tepco.co.jp/decommission/information/committee/roadmap_progress/pdf/2019/d191031_07-j.pdf 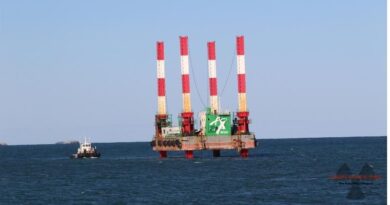 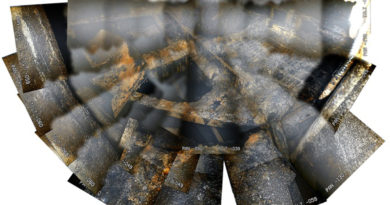