Introduction:
Another year has passed. While there hasn’t been any one big breakthrough in understanding the disaster, there have been many smaller but significant advances.

TEPCO continues to run the response at Fukushima Daiichi. Entities like Japan’s nuclear regulator (NRA) and the decommissioning authority (NDF) have begun to play a larger role. Both entities are working on projects to better understand the initial disaster. In order to create plans and technology for decommissioning the disaster, the meltdowns must be fully understood. The work ahead is daunting, carrying a $728 billion dollar price tag. (1)

Preparation for the Tokyo Olympics are in full swing. The games have been a key public relations tool of the Japanese government as they try to hide the long term problems created by the Fukushima disaster and Great East Japan Earthquake. All of the money and effort may be for naught. As the novel coronavirus (COVID-19) continues to circle the globe, some officials at

the IOC are considering canceling the games.

In this report, most years mentioned are the fiscal year. This runs from March to March for a given year.

The ongoing research and development work related to Fukushima Daiichi is now conducted by various universities and public research institutes around Japan. TEPCO focuses on specific tasks at the plant site. This focus shift to non TEPCO entities includes fostering future skilled workers and the “innovation coast” program. The innovation program encourages tech companies to reside in the region near the plant site and participate in decommissioning activities. (2)

The flow chart below explains who manages what tasks and how the entities relate to each other throughout the work process. NDF is the Nuclear Damage Compensation and Decommissioning Facilitation Corporation. This is the government created decommissioning entity. While groups like NDF exist by government mandate, TEPCO has a seat at the table in these organizations, thus they have some amount of influence.

NDF has taken the lead in managing research and development of technologies and strategies to deal with the disaster site. This has expanded into more projects as the scope of the clean-up is understood.

disaster. NDF indicates that the injection of nitrogen into the containment structures is partially done to reduce the generation of hydrogen, but that may not be the only reason. Nitrogen also reduces corrosion inside the reactor containment by denying oxygen needed for corrosion. Corrosion due to time or oxygen infiltration is considered an ongoing risk. This could cause structural degradation and potentially make damage worse in an earthquake. Structural research is underway on potential scenarios such as earthquake damage to the reactor pedestal or a crack in the containment structure. (3) 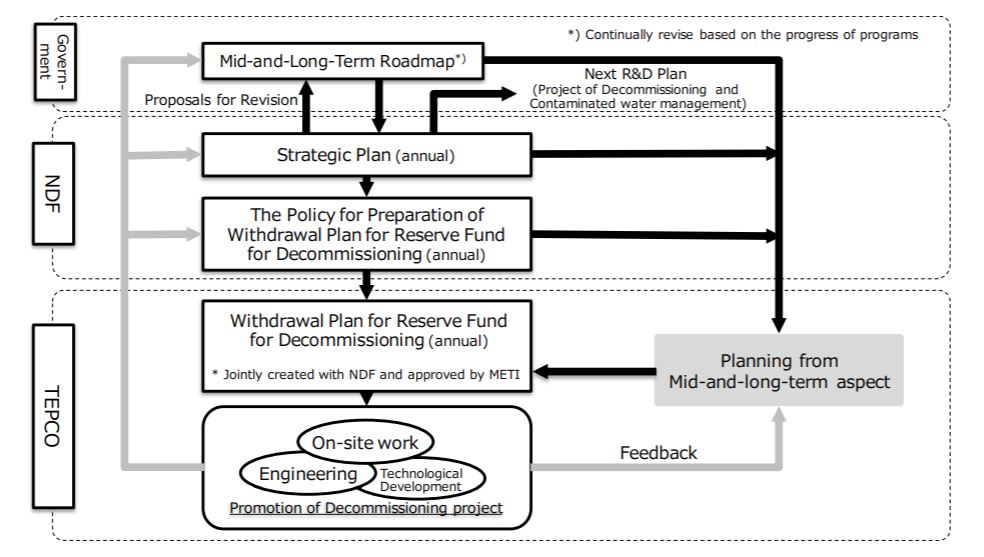 Fuel debris removal has been a high priority, second only to removing the spent fuel from units 1-4. The first unit to have fuel debris removal work attempted will be unit 2. This work is expected to take place in 2021. Preplanning work is underway to determine the methods and equipment for fuel debris transfer and storage. (3) TEPCO plans to have all fuel debris removal completed by 2031.

Unit 3 currently does not have a date.

Fuel in units 5 and 6 should all be removed by 2031. This would include the spent fuel pools and the fuel already removed from the reactor vessels. (4)

The first work will be a side entry retrieval method using an existing hatch opening. When larger scale debris removal begins, a hot cell air lock type entry system will be installed. Research is currently

underway on the specifics of this entry system. Planning documents indicate they may use a “bridge” type system that would span from the ground outside the reactor building to the connection with the containment structure.

This would avoid putting excess weight on the structures for the torus room below. Seismic studies will be required for any work that would cut a large hole into the containment structure, to assure it didn’t create new structural problems. The

The diagram below shows first floor areas of unit 2 that will be prepared as a fuel removal zone.

will be used to conduct the fuel removal work. 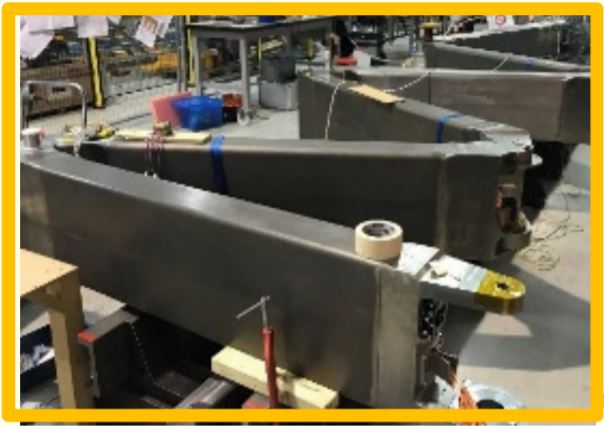 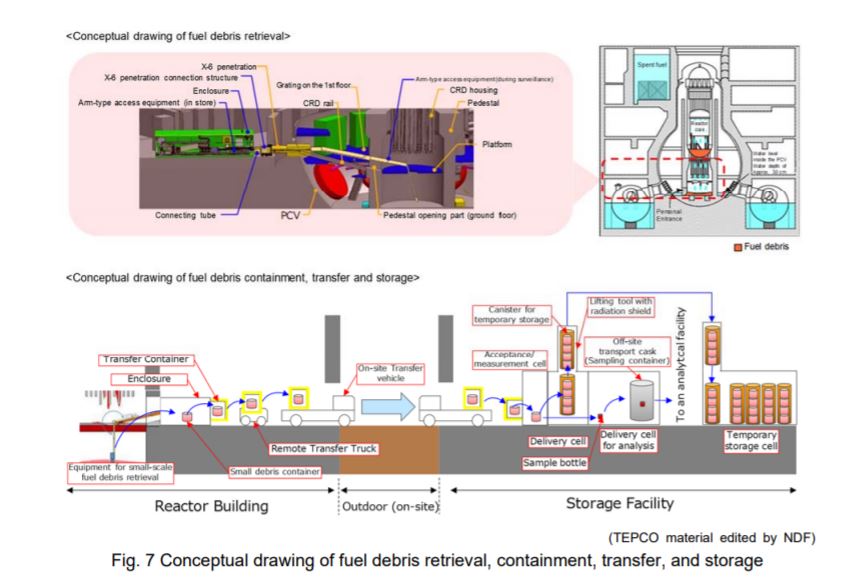 NDF makes this important comment about the risks during fuel debris removal:

“However, the dispersion of radioactive fine particles containing α-nuclides (α-dust) may occur due to the crushing works such as cutting and drilling fuel debris, and there may be a concern for

increasing the concentration of radioactivity in PCVs gas phase.” (3)

Alpha radiation releases from the reactor containments will be a significant risk that requires active management throughout the fuel debris removal and decommissioning process. NDF suggests adding dust monitoring inside and outside

A water purification and re-circulation system to filter water inside containment during fuel debris removal is under development. This would capture

fine particles of fuel debris dust to prevent their spread into the building basements and groundwater. (3)

The diagram below shows some of the proposed additional containment concepts from NDF.

NDF confirms that the issue of reactor cooling water injection has shifted from being done to cool fuel debris to one that will be used to manage heat caused by removal work:

“The decay heat of the fuel debris has been decreased dramatically since the core melt accidents. However, it may be necessary to keep the cooling function to prevent nuclides from shifting from the liquid phase to the gas phase due to thermal energy during the fuel debris retrieval work.” (3)

Work to plug the various pathways between the containment structure and the torus room are planned to prevent highly radioactive water and fuel debris particles from flowing out of containment. A fall back plan to maintain a water level low enough in the torus room that a water leak out of

containment would be unable to leak out of the building basement is also being developed. NDF assumes some alpha particle leakage out of containment in contaminated water will happen no matter what measures they take. A recirculating water system for the containment structure including a filter system may help reduce that leakage. Research towards technology to plug the

torus system and other leak points in containment is under way. A way to completely contain water leaks has yet to be developed. (3) 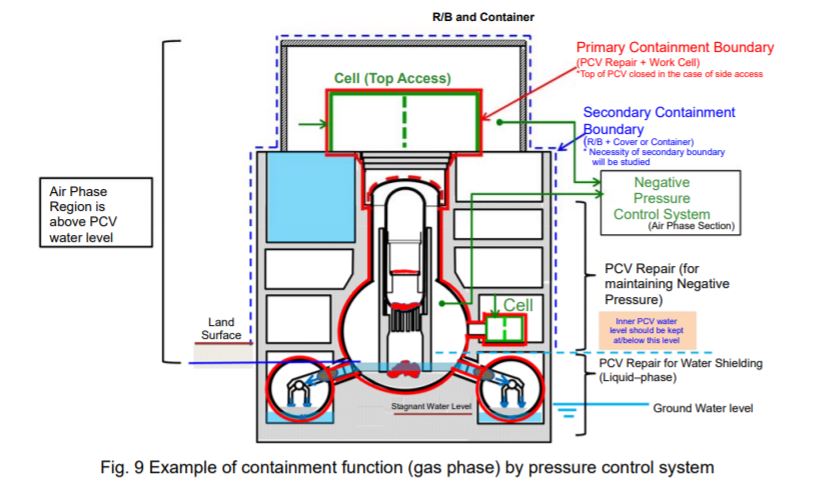 In addition to the alpha particle dust concerns, accidentally creating a criticality in the fuel debris is an ongoing concern. NDF cites concentrations

of Xe-135 below 1 Bq/cm3 as the threshold for what is considered a criticality. This does not mean there isn’t spontaneous fissioning still going on in some

locations within the reactors. Unit 1 continues to show detection of fissioning on plant data reports.(5)

Any potential criticality is expected to be small due to the small volumes of fuel debris that would be moved at any one time. There is the potential for a criticality where fuel debris dusts or fine particles collect, such as the edges of the containment structure or within water filters.(3)

This could still cause serious problems at the plant. A criticality could damage equipment, cause increases in radiation levels at the plant or potentially off site, if the criticality is large enough. NDF has various criticality prevention features planned including a boron injection system. To understand better why a criticality could be such a problematic event, the 1999 accident at the Tokai nuclear fuel plant shows the risk. (6)

NDF plans to do spent fuel and fuel debris removal work at the same time. “Prioritizing fuel debris retrieval by access to the bottom of the PCV from the side – It should be considered that the accessibility to fuel debris and the removal of spent fuel can be accomplished in parallel” (2)

the next step towards storage. This phase of fuel debris removal is still very much in the research and development phase. 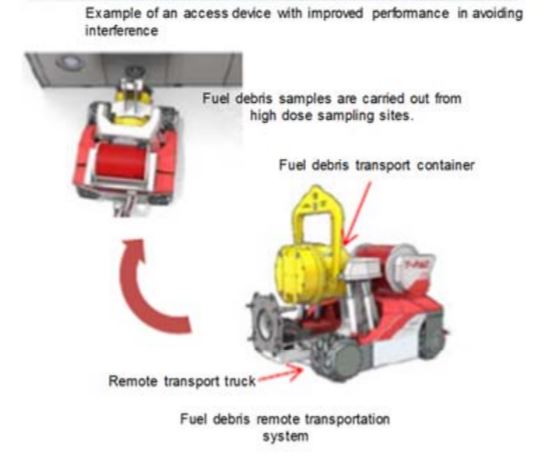 A method for immobilization and stabilization still needs to be determined for the fuel debris. (2)

radioactive material is suspended in glass. TEPCO has toyed with this concept including a preliminary vitrification system. (7)

The vitrification process of nuclear waste management was recently criticized as being less safe than advertised. Researchers in the US found that vitrified nuclear waste reacted with the stainless steel container when moisture was introduced, causing aggressive corrosion. (8)

Laser decontamination technology has been employed at Daiichi to decontaminate the now unused bolt together water tanks. The details of the technology was not explained but it appeared to be a viable technique. (9)

Risk levels at Daiichi are reviewed every year to determine what issues pose the highest risk to people and the environment. This helps guide work planning and research. Stored water in tanks and contaminated water in trenches are the only

factors with a significant drop in risk.

Spent fuel saw a gradual decrease reflected in the removal of spent fuel from unit 4 and radioactive decay. Understanding of all of the risk sources is still evolving. This knowledge gap creates a potential for unknown risks. Aging and degradation of the fuel debris and reactor buildings are cited as risk factors that could change over time. 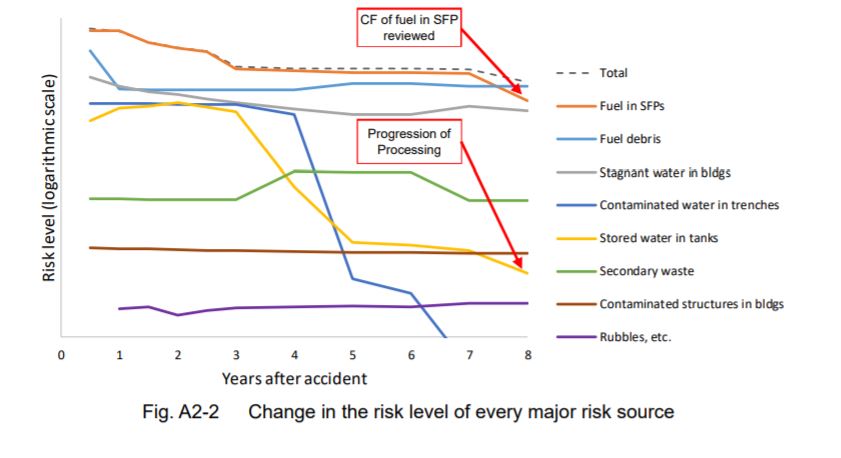 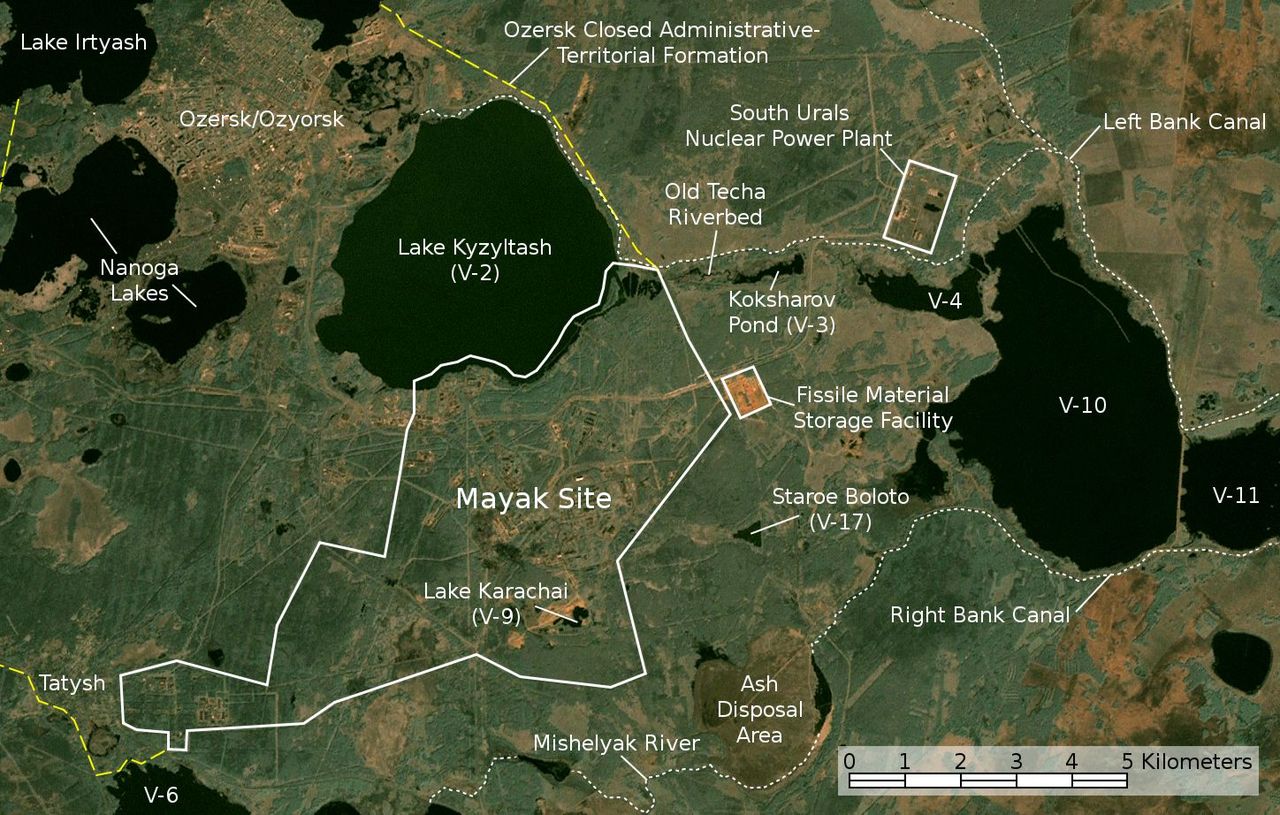