There have been questions about the role the condensate storage tanks played in the early hours of the disaster at Fukushima Daiichi. Below is a compilation of our discussions and discoveries of these tanks, the roles they played and their current status. 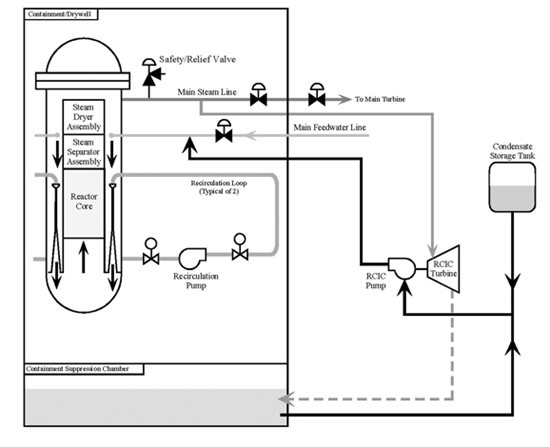 “The condensate storage tanks consist of the four large white tanks in front of the turbine buildings on the oceanside. Their storage capacity ranges from 1,900 m3 at Unit 1 to 2,500 m3 at the other three units. The tanks were about two-thirds filled on March 11. The volume could have fed the RCIC pumps for roughly 19 hours. Once the water in the condensate storage tanks of Units 2 and 3 was running low, the operators had to switch the suction isolation valves to set the suction path to the suppression pool in the wet well (torus) of the primary containment as alternate source for the RCIC and HPCI systems. The switch appears to have accelerated the reactors’ demise. The suction isolation valves may have failed. ” (Peter Melzer’s synopsis of the early events)

Peter had mentioned long ago that the suction valves are known to fail in a post at his blog. These Terry brand RCIC turbine pumps (suction pumps) are known to fail. The NRC has cited inadequate control systems in these pumps. A portion of the pipe system involved in the suction pump is not as seismically resistant as other parts. The suppression pool (torus) itself has its own series of woes related to the disaster such as water hammer effect from acute blowdown, the ability of it to fill with non-condensable gasses and to be damaged by steam or hydrogen blasts. The ECCS lines at most reactors are filled with water in an attempt to avoid a water hammer effect. 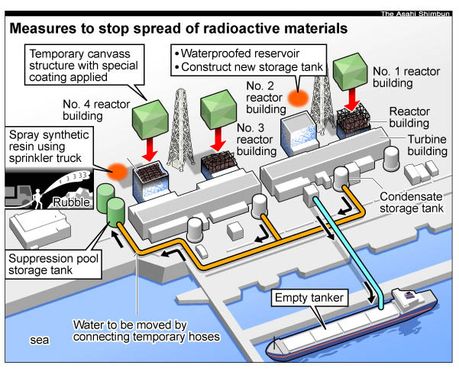 “It lasted about 12 hours instead, according to the NISA reports to the IAEA: “From 04:20 to 05:00, March 12, as water level of the Condensate Storage Tank (CST) decreased and also in order to control rising of the S/C water level, the water source for the RCIC was switched from the CST to the S/C for the RCIC to continue injecting water.” The problems mounted after that. The tanks may have been more or less intact. Attempting to provide cooling water from the suppression pool must have precipitated the demise of the ECCS.”

Unit 1’s tank is the smallest and was used by the core sprayer and the HPCI, due to the smaller tank did this hasten the speed of the meltdown at unit 1? There are also questions about the IC (isolation condenser), it is unclear if or what is the method for make up water if the IC boils dry. The ultimate heat sink, in this case the ocean, was lost to the plant by the tsunami. New water was only available when the fire department arrived and established sea water pumps.

The condensate tanks played a role in the emergency cooling attempts of the reactors,  the amount of water that was in them at the time of the disaster also played a role. 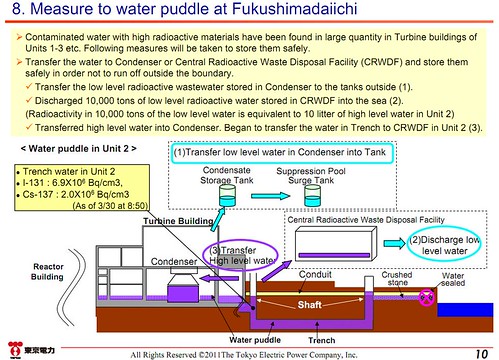 Some of the instances of this are documented like these:

Regarding Unit 3, the parameters of the reactor of Unit 3 are relatively stable. We will throw 70t of pure water to the spent fuel pool of Unit 3 this evening. Regarding stagnant water, we would like to transfer the water in the hot well to the condensate storage tank, but there may be some inflow to the hot well, and we are investigating the source of this inflow. ”

So the tanks appear to have been somewhat operational later on, that they at least are holding water.

One thing that was perplexing is that if these tanks are a critical part of the emergency cooling systems why they are located in an unprotected area facing the sea front. These tanks are vulnerable to tsunami damage or sabotage. There is nothing protecting them. The suppression chamber (torus) is considered the “credited system” that would have the most durable piping systems, the condensate tank system is frequently not considered to be such and therefore doesn’t have the higher grade of piping and systems that is required of rector critical components. The condensate tank supplies the for HPCI and RCIC. The suppression chamber being the “credited system” is why the instrumentation to swap the suction to the suppression pool at low CST level or high suppression pool level are the only Tech Spec required components. The condensate tank is not considered a critical system, the pipes to the condensate tank are known to be a source of tritium leaks at nuclear power plants.

We did discover some foundation damage on the tanks at Fukushima Daiichi. The ground underneath had sunk in many places. This matches the nearby pavement that became wavy as the ground sank and bulged from the earthquake. This distant location also requires piping to run from the reactor building, through the turbine building and out to the tank outside in order to make the full path to the reactor systems. Each time piping goes through a building it increases the risk of pipes being damaged as different buildings move with an earthquake differently based on their construction. If these pipes are not the same class as critical reactor piping they are also more prone to damage. The condensate tank placement shows yet another weak link in reactor safety and plant security. 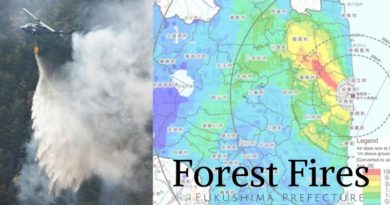