As of writing this the mysterious orange glow has been going for over an hour. Someone spotted the strange oscillating orange glow on the TBS camera.
For it to show over the treeline and the hill behind the reactor buildings it has to be over 1 story off the ground. Based on the faint yellow glow that can be seen on
the TEPCO camera it appears to be to the right of the reactors and vent towers putting it somewhere near the road. 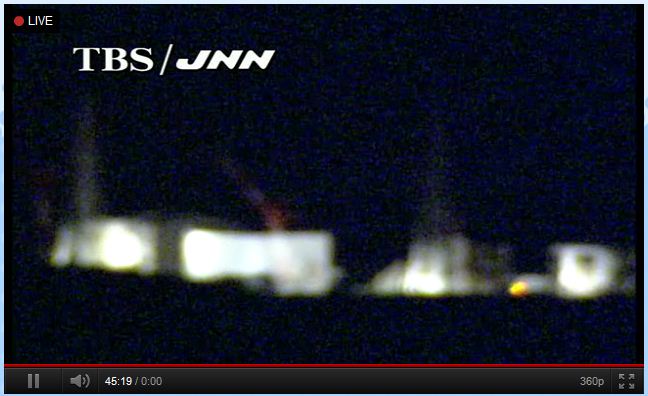 The fire has only slightly increased over time, it has not burned out or spread. The oscillation has no pattern and is too high up to be something like a vehicle warning light.

TEPCO has had a habit of doing work that is inconvenient to their public relations tactics at night when people are not watching. Over the last hour plus no movement of staff was found on the TEPCO live camera. Frequently when workers respond to something at night,  lights will be moved, turned on and off or vehicle movement will be visible. So far nothing of that kind has been found.

There has been an ongoing problem of hydrogen build up at units 1-3. TEPCO has increased nitrogen injection and lowered the watering volume in attempts to prevent hydrogen explosions. As seen here and here. So hydrogen has been a recent problem.

The nature of the fire has been yellow with hints of green when it wanes. There has been very little smoke. A diesel fuel fire would put off lots of black smoke. A structure fire would burn red or orange.  Sodium burns yellow (as can some other substances). Boron burns green as can barium. Some speculation is that TEPCO is possibly burning off hydrogen. No mention has been made by TEPCO about possibly doing this. They have been battling increasing hydrogen in units 1-3 for weeks. Nitrogen injection was increased and increased. Then they decreased water volumes in an attempt to create more steam via heat in order to abate a hydrogen explosion. In October TEPCO ejected hydrogen from a pipe at one of the reactors to avoid an explosion.

TEPCO also added to their nitrogen injection system on November 30 (announcement date) to inject nitrogen into both the RPV and PCV at the same time. Since the main work being reported is all to battle hydrogen in increasing actions, the idea of some way to pull out and burn off hydrogen isn’t out of the realm of possibility. The big question is how they would remove it with so many systems damaged? Possibly another injection or vent point? While right now all of this is speculation the things we know, the color of the fire, lack of smoke, higher location and ongoing hydrogen problems all point to this as a possibility.

As we find more information we will update.

Fukushima Decontamination May Be Paid For By People Of Japan