This week has seen a series of events by TEPCO and the government of Japan that seem to belie reality and set up a convenient scenario for both parties.

TEPCO’s meltdown analysis
TEPCO announced their melt down analysis with great fanfare, and the absence of an English language version. The scenario was run using MAAP reactor accident software. What TEPCO fails to mention is that even they lack certain details required to establish a reliable model estimate of where the fuel actually is. They claim to be using things such as temperature readings to build their analysis. Reactor vessel temperatures are only useful in a meaningful way when fuel is actually still in the reactor vessel, after that they indicate some atmospheric temperatures inside containment. While that is useful it isn’t an exacting piece of data. This reactor vessel temperature has also been used to claim “cold shutdown”, something that is quite laughable since the fuel is no longer IN the reactor vessel. TEPCO themselves admitted to damage to the bottom of unit 1’s reactor vessel and “inconclusive” on units 2 and 3 when they tried to test control rod sensors and got no results. TEPCO doesn’t know the status of 2 or 3’s bottom head. The other sensors for containment give temperatures inside containment but do not have anything specifically able to show a temperature in the floor of containment or a location method that would aid in finding the melted fuel. TEPCO simply lacks the ability to provide data to come up with such a detailed analysis of where the corium is. Other experts have questioned TEPCO’s analysis as being merely a starting point or otherwise lacking.

The Institute of Applied Energy thinks that 85% of the fuel is melted out of unit 1 and 70% at units 2 and 3. They also think the inner steel shrouds have melted and at least at unit 1 the reactor vessel is likely tilted. In our notes on the NRC BWR reactor training course manual the high heat of a melt down can impact the support structures that hold the reactor vessel in place. These reactor vessels are also known to move or rocket themselves upwards in certain high pressure accident situations.

From the NYTimes:
“The Mark 1 reactors in the United States have undergone a variety of modifications since the initial concerns were raised. Among these, according to Mr. Lochbaum, were changes to the torus — a water-filled vessel encircling the primary containment vessel that is used to reduce pressure in the reactor. In early iterations, steam rushing from the primary vessel into the torus under high pressure could cause the vessel to jump off the floor.”

Our estimates showed that single sump to be about .6 meters deep. Estimations by a reader at EX-SKF show the double sumps TEPCO claims are in the reactors to be 1.2 meters deep. 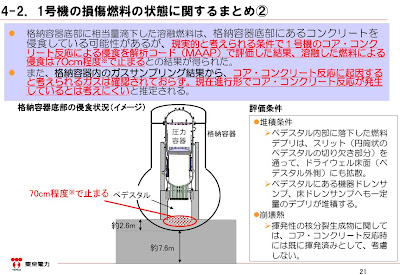 It is rather clear that TEPCO is creating nothing more than a scenario that is convenient to their goals and not based on solid data and facts. EX-SKF has a series of articles detailing the TEPCO analysis with translations and additional information. Here, here and here.

TEPCO claims reactors withstood the earthquake
TEPCO again tries their old and debunked claim that the reactors withstood the quakes and that the tsunami did all the damage due to wiping out their generators. They claim that the tsunami knocked out the cooling systems and that no abnormalities were seen in reactor gauges before the tsunami hit. Professor of engineering Tadashi Narabayashi at Hokkaido University thinks TEPCO’s claims need outside analysis and questioned the accuracy of TEPCO’s claims. “The utility has often made mistakes in simulations that analyzed what happened.”

The workers at the plant and our evidence show something quite different to TEPCO’s claim. The Atlantic article that interviewed workers who were at the plant during the quake made statements that showed considerable damage and chaos was going on before the tsunami hit.

“It felt like the earthquake hit in two waves, the first impact was so intense you could see the building shaking, the pipes buckling, and within minutes, I saw pipes bursting. Some fell off the wall. Others snapped. I was pretty sure that some of the oxygen tanks stored on site had exploded but I didn’t see for myself. Someone yelled that we all needed to evacuate and I was good with that. But I was severely alarmed because as I was leaving I was told and I could see that several pipes had cracked open, including what I believe were cold water supply pipes. That would mean that coolant couldn’t get to the reactor core. If you can’t sufficiently get the coolant to the core, it melts down. You don’t have to have to be a nuclear scientist to figure that out.”

“As he was heading to his car, he could see the walls of the reactor one building itself had already started to collapse. “There were holes in them. In the first few minutes, no one was thinking about a tsunami. We were thinking about survival.”

“After the second shockwave hit, I heard a loud explosion that was almost deafening. I looked out the window and I could see white smoke coming from reactor one.”

When the worker got to the office five to 15 minutes later the supervisor ordered them all to evacuate, explaining, “there’s been an explosion of some gas tanks in reactor one, probably the oxygen tanks. In addition to this there has been some structural damage, pipes have burst, meltdown is possible. Please take shelter immediately.”

Our photo records showed a significant fissure runs up to the unit 1 reactor building. TEPCO later filled in this large fissure with dirt as can be seen in the 2nd image. This along with all the workers accounts raise concerns that inside unit 1 is heavily damaged and cracked. Containment and the concrete base mat could be drastically cracked and TEPCO is ignoring these factors. 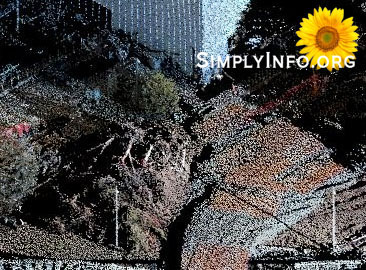 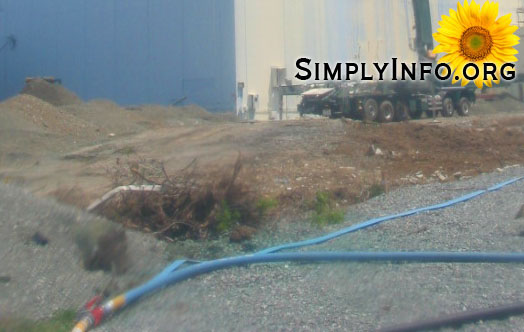 TEPCO orders cameras
TEPCO (via Hitachi-GE) has ordered high tech cameras from Swedish company ISEC. ISEC’s camera is intended for use in radioactive environments. Hitachi claims this is for worker safety but it could likely be for an attempt to find the melted fuel and the extent of the damage. It was about this far into the disaster that the workers at Chernobyl began attempts to drill and insert cameras into the reactor building. Seven months after the explosion at Chernobyl workers began attempts to insert remote cameras into the reactor building. They found the “elephant’s foot” mass of melted fuel in December 1986, 7 months after the explosion. The timing is about right for attempts to use cameras to locate the melted fuel based on Chernobyl. To date TEPCO has made no publicly announced attempts to locate the fuel.

TEPCO vaguely admits hydrogen purge
There has been an ongoing battle with hydrogen build up in the reactors. Over the past month or more various escalating attempts to bring the hydrogen situation under control have been attempted. We outlined some of the new attempts to deal with the hydrogen here. NHK also mentioned later that day that TEPCO is purging hydrogen from some of the units at the plant as they increase the nitrogen injection.   TEPCO mentions again on December 2nd that they are exhausting air out of unit 2 through a gas management system as they are injecting nitrogen. They doubled the nitrogen injection rate at the same time. We reported yesterday of the hours long flame spotted on the TBS camera overnight. This fire appeared to be a controlled gas burn off, likely burning off the hydrogen being extracted at unit 2.
Govt. announcement cold shutdown will be Dec 16th
So why all of these well orchestrated announcements? Hours later the government announces that cold shutdown will be declared on December 16th. They cite the TEPCO new analysis report as a key component to making that declaration.

“Prime Minister Yoshihiko Noda may declare a cold shutdown because a November 30 analysis by plant operator Tokyo Electric Power Co showed that temperatures for the nuclear fuel lying at the bottom of the containment vessel have stabilized, the paper said.”

This is why TEPCO was so careful to show that their calculation has the melted fuel just inside that steel containment bulb. It allows “cold shutdown” to be declared. So why is the government so keen to declare “cold shutdown”?

“Declaring a cold shutdown will have repercussions well beyond the plant as it is one of the criteria the government has said must be met before it begins allowing 80,000 residents evacuated from within a 20 km (12 mile) radius of the plant to return home.”

Daily Yomiuri outlined why any claim of cold shutdown is both technically inaccurate and laughable.  What is of more concern is that the government and TEPCO are working together to create a false reality that both helps absolve them from liability and costs and could potentially leave evacuees without real help. If the evacuation zone is lifted you can go home. Never mind home is highly radioactive, similar to Chernobyl’s evacuation zone and will be that way for decades. 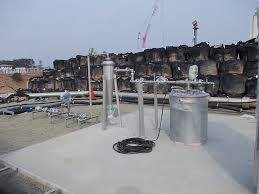 TEPCO Knew Of Need For Groundwater Bypass In May 2011 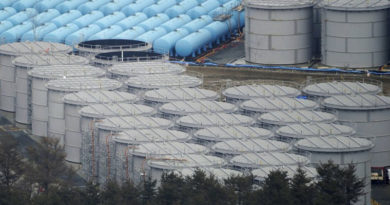