After the New Years Day quake in Japan all appeared normal at Fukushima Daiichi. Now Japanese Media is stating there is a problem with unit 4’s spent fuel pool. It is leaking somewhere connected to the skimmer tank next to the spent fuel pool. The skimmer tank is losing water five times faster than it normally does due to evaporation. Kyodo News is saying the tank is dropping 8cm per hour.

Unit 4 is the reactor with the heavily damaged structure and the spent fuel pool that was concerning officials that it might collapse. Reinforcement work to the pool was completed late this summer but is still of concern that it could be damaged by subsequent strong earthquakes. This particular fuel pool has a complete reactor load of new spent fuel in it from the maintenance outage going on when the quake hit.

This is what TV Asahi says about the damage at unit 4, via Google Translate:

“Tank adjacent to the spent fuel pool in Unit 4, Fukushima Daiichi nuclear power plant has been confirmed that degraded at a rate nearly five times the normal level. TEPCO is in a hurry to identify the cause. Around 5:30 pm on October 1, adjacent to the spent fuel pool at Unit 4 “gap surge tank,” found that the water level drops relatively quickly. Normally it is reduced by evaporation, etc., that was five times as fast. So far, water leaks around the reactor building cooling systems and have been found circulating in the pool. If cooling continues the pool itself, and changes in water temperature is in that space. TEPCO will conduct joint investigations, such as pipes, in a hurry to identify the cause of the reservoir drawdown.”

This is the report from 47 News, a Kyodo News subsidiary, via Google Translate:

“The first nuclear power plant in Fukushima No. 4 or plumbing leak in the cooling pool
Day TEPCO announced that might leak from the piping is going on with the circulation of the spent fuel pool cooling of Fukushima No. 1 nuclear power plant 4. Changes in the pool water level has continued without cooling. Accumulated water from a pool full of “skimmer surge tank,” the water level dropped by about 8 cm per hour during the afternoon 2-5. Mainly in natural water evaporation was down in the past, was about 1.7 centimeters per hour. Water, heat and impurities are removed from the tank through a pipe back to the pool again. TEPCO has been investigating the cause of the leak happened and look at places such as piping connections.”

TEPCO currently has no information about this on either their English or Japanese press pages.

H/T to Fukushima Diary who broke the story 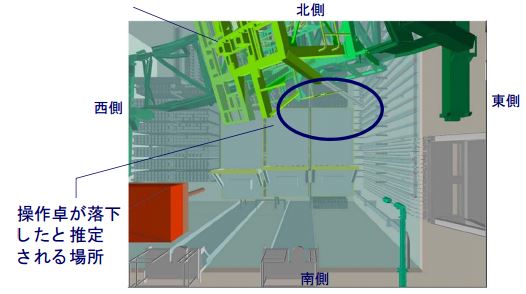