84% of Japan businesses do not want reactors restarted or only want restarts only after sufficient safety changes are made. These businesses were against the reactor restarts even if it could potentially have negative impacts on their business. With such strong opposition in the business community and with the general public it makes one wonder exactly who is for the reactor restarts?

METI ministers visited the governors of Kyoto and Shiga prefectures to try to pressure them into approving reactor restarts. Shiga’s governor complained of the both the promotion of nuclear power and the oversight of nuclear power being with one agency (METI) and that the neutrality and transparency of the information being used by the government was in question. This included the claims of power supply and demand being cited by the government as the reason for the reactor restarts. The central government continues to push that people should “understand” as if there is a failure to comprehend what they are presenting. It appears to be that their reasoning fails to convince anyone of the validity of their argument in favor of restarts.

Over the weekend METI minister Edano announced that Japan would end nuclear power in Japan….in 40 years.  Meanwhile Japan’s power companies failed to document their non-proliferation measures for plutonium in Japan to the IAEA. This isn’t the first year that Japan has come under fire for not properly documenting their nuclear materials stockpiles. The uncertainty of Japan’s fast breeder and MOX program could have contributed to the delays.

With so many in Japan against the reactor restarts it begs the question, who is for them? 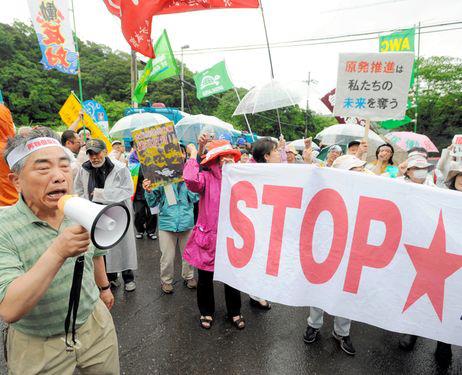