A worker at Fukushima Daiichi documented the events as he sought work at the disaster site and how the system is worked.

He released a full video on YouTube that shows much of the training process for new workers and his narrative but it lacks English subtitles. He does show a brief bus ride into the plant.

Some things he mentions of his experience:
He was given a pre-filled resume to use that claimed he had previous nuclear experience that he did not have.
They attended a 1 day seminar as the extent of their radiation safety training.
They were misinformed that exposure to 1mSv of radiation would “go back to zero” in 8 days.
He was told he would be checking in/out equipment and doing radiation survey.
His actual work involved changing the agitator in the Areva decontamination system (high dose work).
He was told this high dose work was the same as the exposure other workers at the plant received daily.
There are many 18-19 year old workers at the plant.

Tetsuya Hayashi also described the many layers of sub-contractors skimming money off of the workers wages. This is something that has been confirmed by just about every investigative report of the work situation at the plant. He also mentions how many of the workers are hired on a day laborer basis so their work has no benefits and many have no experience working in dangerous radioactive conditions.

Hayashi’s work was drastically different than what he was hired to do. The work changing out parts on the decontamination systems is quite dangerous and exposes the workers to large amounts of radiation. He describes the work as being very short turns of 5-10 minutes before workers switch out due to the high radiation levels. One of the flaws in the Areva system is that it requires hands on maintenance of the equipment such as changing out highly radioactive filters. Workers at the plant have reported over the last year many frustrations with the Areva system. That it breaks down frequently and is dangerous to maintain. The new decontamination system being built at the plant appears to be designed to avoid that direct worker exposure by using a large layout and cranes to change filters.

FRCSR provided a translation summary of the original news article that was in Japanese.
The original article in 8 Bit News can be found here. 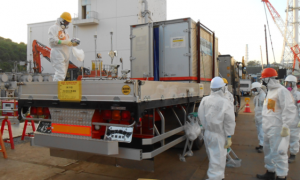