The fukuleaks.org/web research team has been following and documenting the events in Unit 1 since March 11, 2011. As part of our ongoing research into the Fukushima Daiichi nuclear disaster. Inside containment by way of the recent scope inspections it was found that the interior looked quite different from unit 2’s containment. Unit 1 appeared very black and charred, with a light amount of steam and condensation. Inside unit 2 the paint had bubbled and peeled off. In unit 1 much of the paint appears burned off with small patches still showing the orange paint peeling off of the steel.
Inside unit 2’s containment looked like this: The charred appearance could be a sign of some sort of explosive event inside containment. On one of the earlier scope examinations done inside unit 1 a broken piece of concrete was found on the grate. It is also known that the inside of unit 1’s containment was well over 700 Celsius at certain points in the disaster and it was hot enough in containment to melt the inside lead cover plate for the penetration hole being used for the scope inspections. Explosive events are known to be possible inside reactor buildings, inside containment structures and inside the reactor pressure vessel. Unit 1’s accident progression was rapid. By the early hours of March 12th, 2011 radiation levels were rising in the turbine building of unit 1. At the point unit 1 lost cooling the meltdown took place in less than an hour. This would also cause the rapid build up of hydrogen as fuel melts. The hydrogen explosion of unit 1 could have occurred in locations beyond just the refueling floor. This would explain the charred appearance of the containment structure and possibly some of the damage found inside so far.

Workers were able to briefly obtain some pressure readings in unit 1, The recordings show pressures close to, but not exceeding, the setpoint of safety/relief valves. Intriguingly, there is no evidence that safety/relief valves opened. This lack of pressure buildup in the reactor vessel indicates either the pressure indicators were not working properly or there was already an opening in the reactor vessel allowing pressure to escape. There has long been an assumption unit 1 suffered from a LOCA (Loss of Coolant Accident). This could be both the cause of no pressure build up that exceeded the set limits in unit 1 and the route for corium to exit the reactor.

Any hard pressure pulse or explosion inside the reactor vessel (RPV) would help to push melted fuel out of the reactor. This could be out pipe connections or downward through the bottom head. As melted fuel begins to heat up the reactor vessel the penetrations of the structure are the weak points. These connections of pipes or entrance of instruments will fail first and can have the connections fail by heat and pressure working on the bolts & gaskets. There are over 200 connections into the bottom head of the reactor at unit 1. A explosion or pressure pulse would push down, or outward on that melted fuel forcing it further out the connections or forcing an already melting and weakened area to rupture. If there was already an opening in the lower reactor such as that from a LOCA, it could be an exit point for corium out of the reactor vessel. The weight of the corium and any pressure behind it could force the melted fuel out a hole created by a LOCA. In the case of a LOCA fuel is uncovered, interactions and fuel melt,  maximum hydrogen generation and a possible detonation in vessel are possible. A pipe break low enough in the vessel which would still allow fuel melt but trap the hydrogen in the reactor vessel, especially if the safety relief valves don’t lift could create conditions where an in vessel hydrogen explosion could happen.

Unit 1 is an older unit having been built in 1969. The age of the reactor would have contributed to the structural weakness of the reactor vessel and the integrated parts. Pipe connections referred to as “pipe thimbles” are areas of specific concern. The neutron bombardment of the steel over time can create small cracks in the steel and weaken the weld areas for these pipe thimbles. Both theories show known methods of fuel behaviors in a meltdown. 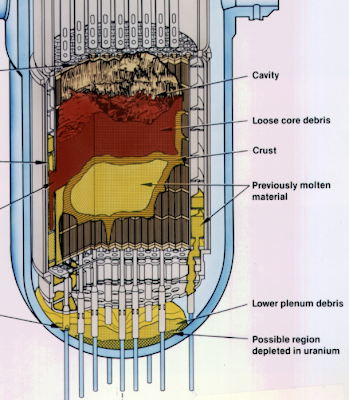 Our recent research also shows the torus downcomer bellows joint to be a weak point in the design. The joints in the downcomer pipe intended to allow the pipe to flex with movement of the torus also creates a weak point where corium could break through before reaching the inside of the torus. Other estimations on the ability of corium to move laterally show opportunities for corium to end up in the torus room that surrounds the torus.  The illustration below shows a 15 meter lateral line, this is similar to the lateral corium flows at Chernobyl. Corium may have traveled out pipe penetrations, or out one side of the bottom head then out the downcomer paths into the torus room. It could have also done both where some escaped out into pipes and the remaining into the east side torus room.

The torus room itself was in much worse condition than units 2 or 3. There were what looked like directional scorch marks, heat damage to power cable insulation and excessive small debris in the standing water found in the lower torus room. This is the condition on the west side of the torus room, the east side would likely be far worse if it was possible to inspect that area.

The radiation readings in containment, around the building and in the torus room taken together point to the east side torus room as the general location of the melted fuel. With this being the case, TEPCO’s decommissioning plan will need to be changed. It also causes more concerns about radiation and contaminated substance releases from the plant. What is unknown at this point is if the fuel could have traveled further down inside the torus room that only has 2.7 meters of concrete foundation, or further laterally through the wall or openings between the torus room and other interconnected rooms between the reactor building and the turbine building.

* TEPCO’s inspection of the torus room of unit 1 recorded readings of  10 E 8 to 10 E 9 in the lower water in the torus. TEPCO gives this range rather than a single number for these levels in the water and cites an instrument failure. They cite that the meter stayed at these extremely high levels until they removed the instrument. TEPCO frequently cites instrument failure when they run into readings beyond a meter’s capability or where they are unsure of the accuracy when they reach an instrument’s capabilities. The meter returned to a lower reading once removed indicating it was exposed to a very high source but the actual numbers could not be established with confidence. 6 thoughts on “Unit 1, Where The Melted Fuel Is”