Oyster Creek Nuclear Station is under an alert after storm waters exceeding the high level criteria per the NRC. The NRC does not state what that level was. In our earlier reporting today we mentioned that the plant itself sits about 10 feet above sea level and the water levels at the nearby USGS station had already exceeded 8 feet today. The USGS station near Oyster Creek nuclear station has been going in and out all day. It showed the 8 foot reading, a bit of a drop below 8 feet but then the station stopped reporting before Sandy officially made landfall.

“The U.S. Nuclear Regulatory Commission is continuing to monitor impacts from Hurricane Sandy on nuclear power plants in the Northeastern United States, including an Alert
declared at the Oyster Creek nuclear power plant in New Jersey. The plant, currently in a regularly scheduled outage, declared the Alert at approximately 8:45 p.m. EDT due to water
exceeding certain high water level criteria in the plant’s water intake structure.  “
“The Alert was preceded by an Unusual Event, declared at approximately 7 p.m. EDT when the water level first reached a minimum high water level criteria. Water level is rising in the intake structure due to a combination of a rising tide, wind direction and storm surge. It is anticipated water levels will begin to abate within the next several hours”
http://www.nrc.gov/reading-rm/doc-collections/news/2012/12-042.i.pdf

The area around Oyster Creek is partially out of grid power. It is unclear if the Oyster Creek nuclear station has grid power or not. Oyster Creek is currently offline for refueling but still requires AC power from either the grid or their diesel generators to keep both the spent fuel pool cool and to operate some critical plant functions.

“At the Millstone nuclear power complex on Connecticut’s shoreline, officials said they were powering down one of the two reactors to 75 percent of maximum output to maintain stability of the electric grid. Millstone spokesman Ken Holt said the grid’s stability could be affected if the unit was operating at 100 percent and suddenly went offline, which isn’t expected to happen.”
Flood barriers have been put up at Millstone.

“At the Salem and Hope Creek plants in Hancocks Bridge, N.J., which together produce enough power for about 3 million homes per day, officials were watching for sustained winds of 74 mph or greater that would trigger taking the plants offline. The nearby Delaware River posed another hazard if water levels exceed 99.5 feet, compared with a normal level of 89 feet.”

“In Lusby, Md., the Calvert Cliffs Nuclear Power Plant was operating at full power — enough to power more than 1 million homes. Additional staff, both onsite and off, were called in to prepare for the storm. Safety officials there will take the plant offline if sustained winds exceed 75 mph or water levels rise more than 10 feet above normal sea level.”

“Seventy-five was also the number at Indian Point in Buchanan, N.Y., where officials said they were fully prepared to withstand surging water levels from the Hudson River.”

“At Pennsylvania’s Susquehanna plant in Salem Township, officials were ready to activate their emergency plan, a precursor to taking the plant offline, if sustained winds hit 80 mph.”

Some additional Sandy related information, these photos found by SimplyInfo members this evening as Sandy has rolled into the east coast: earlier today the Atlantic City newspaper had this picture. Ocean on left, I think the pilings are supports for the Boardwalk that was swept away.

These notes from Der Spiegel: 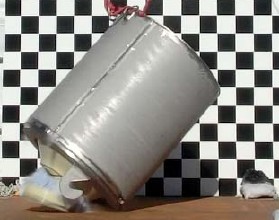