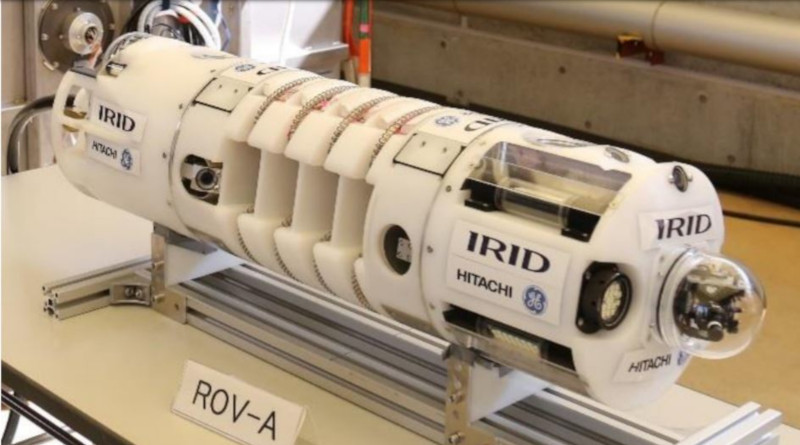 The long planned, next phase of inspection work inside unit 1 has finally been unveiled to the public. The plan was originally stated as an effort to inspect inside the pedestal of unit 1. This has changed as as the approach to the inspection.

IRID showed the first of a set of 5 swimming ROVs (remote operated vehicles) to the press last week. These are not true “robots” as they require a tether cable for power and control functions. The other robots put into the containment systems of various damaged reactors at Fukushima Daiichi were actually ROVs, even though they were frequently described as robots. 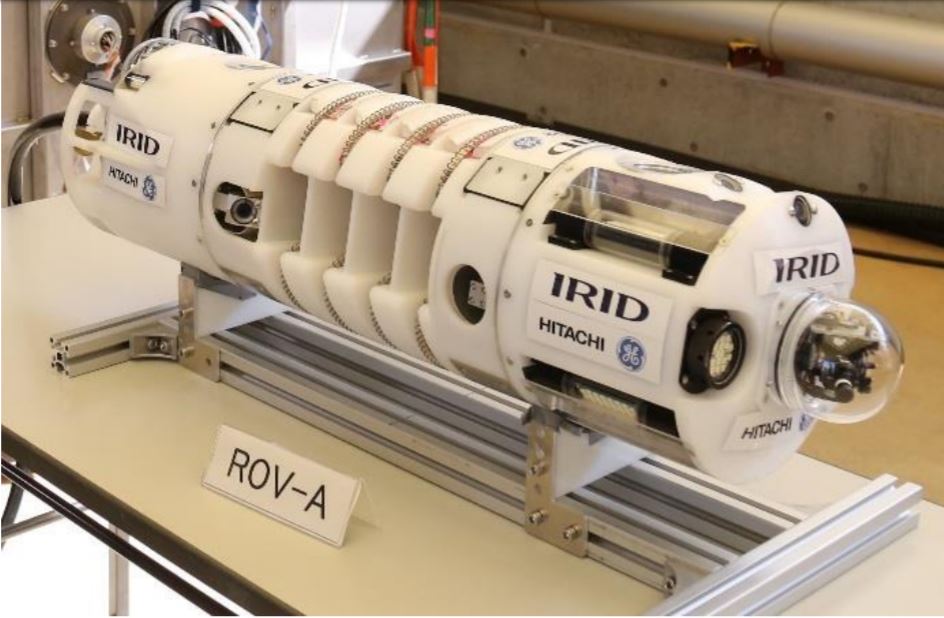 The ROV group to be deployed inside unit 1 each has a specific task. A small ROV will also be used as a secondary camera to view the ROV doing the inspection work. First a guide ring will be installed in containment. This will prevent the tether cable from becoming tangled. Then ROV A will take images around the containment structure. ROV B-E will do specific steps of inspecting the containment floor. 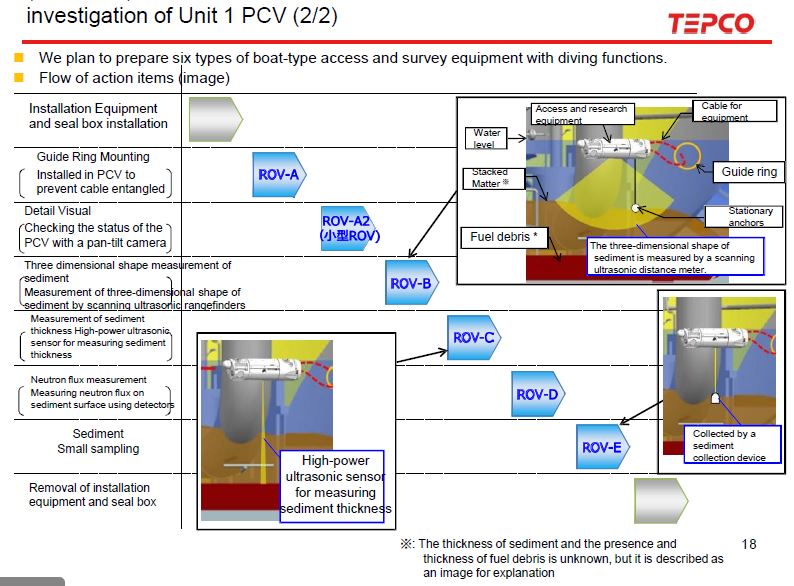 TEPCO & IRID mention in their reports that they assume the sand like sediment on unit 1’s containment floor could be deep and that they assume there may be some fuel debris below this layer. Radiation levels found around the containment structure interior and near the sediment on the floor do not indicate any significant amount of fuel debris. What they do or do not find here will be of great interest.

The inspection plan does include the possibility of sending one of the ROV units into the pedestal. This work would only take place based on what they find on the outer containment inspections. Neither party mentioned what findings would cause them to do the pedestal inspection or to not undertake that work.

Before the ROVs can enter containment TEPCO/Hitachi must make an entry port into containment. For this work they plan to drill through the X2 crew entry door. This is an access hatch for workers to enter the containment structure. This consists of two sealed steel doors. The area has already been cleaned and a series of lead shielding curtains have been placed over the door area to lower radiation exposure of the work crews. 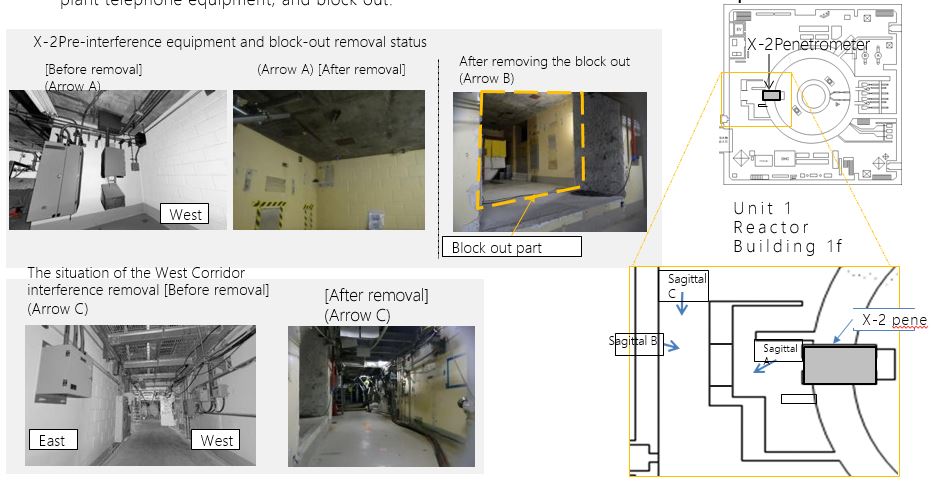 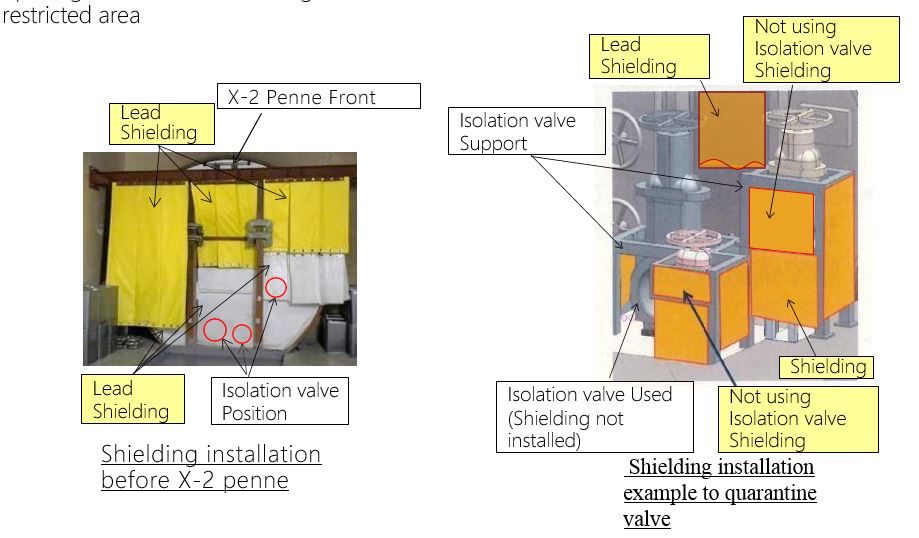 An isolation box will be used to introduce and remove each ROV unit. A guide pipe and isolation valve will be installed through the X2 doors to act as a reliable entry device also capable of preventing leaks to the outer building.

Water levels in the lower containment of unit 1 are lower than in unit 3 where swimming ROVs were previously used. Unit 1’s water level is higher than the minimal water level inside unit 2.

Among the details of this upcoming inspection is a claim that unit 1 has been operated at a positive pressure for years. This means instead of a negative pressure where air or nitrogen is drawn out of containment to prevent substances from leaking out, unit 1 has been pressurized. The explanation given for this was the need to lower hydrogen production by filling the containment and suppression chamber with nitrogen. Unit 1 has had ongoing evidence of hydrogen production and spontaneous fissioning. Why unit 1 has this problem that must be solved by excess pressure in containment yet units 2 and 3 do not has never been explained. This may also provide a new hint about the hastily installed tent over unit 1 soon after the initial disaster.

IRID report machine translated to English (includes only pages that were not included in TEPCO’s version)
https://www.dropbox.com/s/ite6by8s6jymsms/IRID_unit1_inspection_2019_edited_translated.pdf?dl=0