General radiation levels have reduced in the decade since the accident. Some aspects still pose a health risk to the public. Insoluble cesium-bearing microparticles typically referred to as “microparticles” are microscopic pieces of melted reactor fuel. Many of these are small enough to inhale, are highly radioactive, and can lodge in the lungs. Due to its insoluble nature, the body cannot easily expel these materials, creating a long-term highly localized internal radiation exposure. These have been found in the regions that were originally subjected to fallout from the reactor meltdowns. They tend to concentrate in ditches, gutters, places where water or dirt collects. They have been found as far away as Tokyo. Activities that kick up dirt or involve walking in areas likely to be contaminated pose a higher risk. High winds and typhoons are also a concern for suspension into the air and the redeposition of these microparticles. Industrial grade N95 masks may be sufficient to reduce the risk of inhaling microparticles during lower-risk activities.

For newer food testing data we suggest independent testing done by Iwaki Mother’s Radiation Lab. Their data has been more relevant than some of the government-sponsored data and they test samples brought in by the public. Their data in English can be found here.

Foods that are at the highest risk for potential contamination are wild vegetables, wild mushrooms, deer, boar, and bottom feeder-type fish from the areas closest to the disaster site. The findings in Japan are similar to the findings after Chernobyl. These high-risk foods are still heavily contaminated in the Chernobyl fallout regions of Europe.

Risk Factors:
Radiation impacts children and pregnant women much more than it does men. Women who are not pregnant in general fall somewhere between the risk for children and men. More caution should be taken based on the person’s risk factor.

Determining Radiation Levels:
There are a number of resources that will show the current environmental radiation in cities across Japan.  They are normally in microsieverts per hour or uSv/h. The pre-accident background levels in Japan are in millisieverts per year or mSv/year. We will explain how to interpret the two so you can understand any radiation increase in an area you plan to visit.
* millisieverts are 1000 microsieverts.

An example for Tokyo:
Current readings on May 9, 2012, showed a radiation level of between .05 uSv/h and .261 uSv/h and the natural background radiation around Tokyo was .99 mSv/year
.05 uSv/h x 8765.8 = 438.29 uSv/year or roughly, slightly less than .5 mSv/year. This is less than background levels.
.261 uSv/h x 8765.8 = 2287.87 uSv/year or 2.2 mSv/year roughly just over double the pre-disaster background level in Tokyo but this is the higher end of the varied readings around Tokyo. There are of course higher levels being found in “hot spots” where radiation collects in the environment. 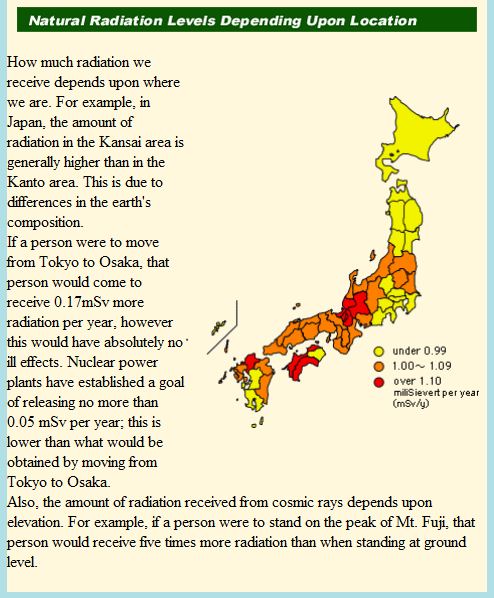 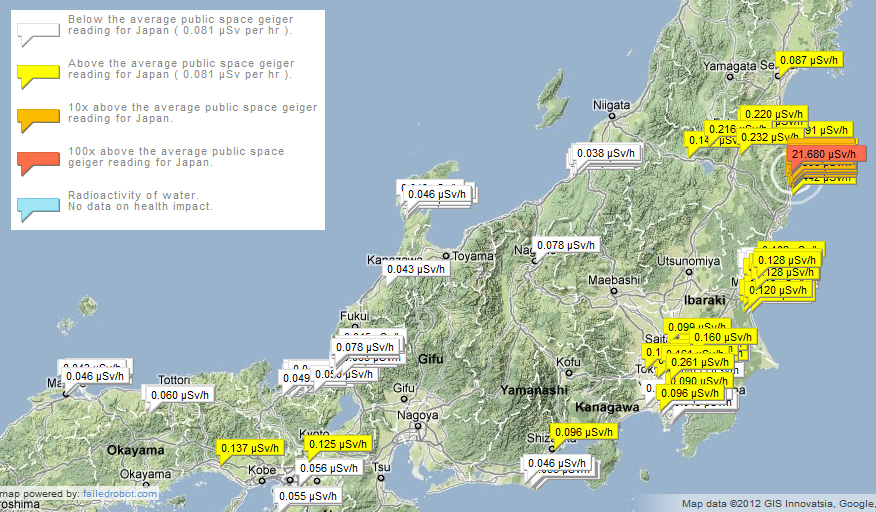 Live radiation readings taken in May 2012 show the “per hour” reading in various areas.

Consumption Safety:
The environment is one risk factor for potential contamination, the other is what you consume. Eating or drinking substances contaminated with radioactive substances will cause internal exposure, something that can be worse than external exposure from the environment. Even in an area of little or no environmental contamination, food can be a risk factor. As with any modern culture, food is shipped from various places or co-mingled with food from many sources. Knowing the source of what you are eating, sticking to things lower on the food chain and food of better quality can help lower risk. 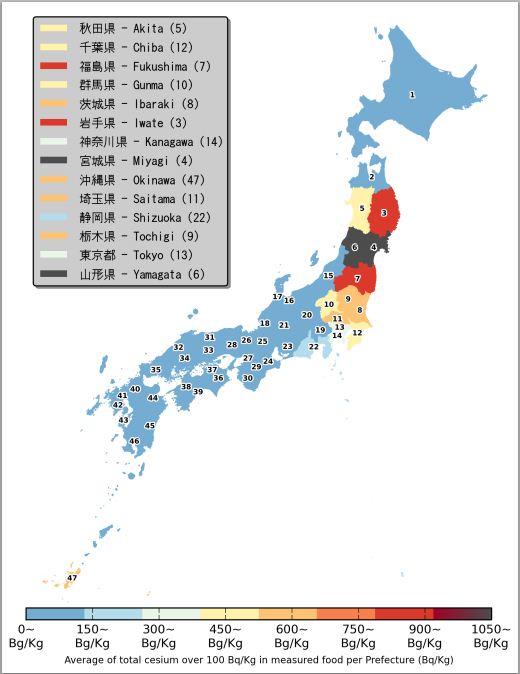 Some suggestions for safer food consumption:

Both are typically available as bottled water in most countries.

Places where contamination can concentrate:

Practicing good hygiene and housekeeping habits can also lower exposure if you plan to be in a contaminated area. Leave shoes outside or in an entryway to keep contaminated dirt out of inside spaces. Wash your hands before eating or putting anything into your mouth with your hands. If conditions are dry and very windy a nonwoven pollen mask can be worn to block contaminated dust and dirt from being breathed in. A simple N95 dust mask is suggested by various groups in Japan as being sufficient to block contaminated dust and dirt that can be blown around. If you plan to be in an area with some contamination packing a few of these may be of use. They also block pollen.

Find out more about radiation protection measures you can take to lower exposure from this handy guide from The Coalition For Independent Investigation
http://www.cfii.info/HHP-bilingual1.pdf

Resources:
Distillation to remove cesium, test by University of Nebraska at Lincoln
http://mypurewater.com/wp-content/uploads/2011/06/Removal-Efficiency-Test_Cesium062011.pdf

Removing i-131 from drinking water
http://www.forbes.com/sites/jeffmcmahon/2011/04/07/how-to-remove-radioactive-iodine-131-from-drinking-water/

*MEXT radiation data was transferred to Japan’s Nuclear Regulator (NRA)
In March of 2022, NRA will hand this over to JAEA, Japan’s nuclear research agency.
The JAEA site is live but has technical issues and loads extremely slow. This site does
have a wide variety of available radiation data types.

Food contamination spreadsheet for 2012 up to April
https://www.google.com/fusiontables/DataSource?docid=1nwpvycEMumUtCwnaC0ThwQS47n2Nd83BpniviGo

*check our pages for updates on food contamination as we receive them.