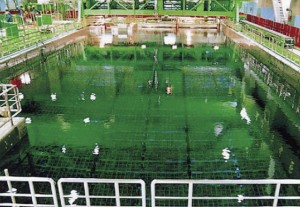 A spent fuel assembly can have 7,500 trillion becquerels of radioactivity within it 3 years after being removed from the reactor. This is why spent fuel is always handled underwater or stored in casks

The common or shared pool and current cask storage are part of TEPCO’s pre-disaster fuel management plan. The common pool holds much of the overflow spent fuel inventory from units 1-6 at Fukushima Daiichi. As part of TEPCO’s roadmap they intend to make changes to the common pool so damaged fuel may be inspected and stored separately from intact fuel assemblies. (This will include adding a bulkhead wall to separate the two.) The bulkhead plan was scrapped in 2012-2013 in favor of removing fuel from the common pool to cask storage to make room.

By September 2014 most of the spent fuel had been removed from unit 4. The remaining fuel consists of mostly unused fuel assemblies and damaged assemblies. At least some of these will be stored in the spent fuel pool of unit 6 for the time being. As of November 2013 TEPCO began moving fuel from the unit 4 spent fuel pool to the common pool. TEPCO announced prior to this that they were moving current fuel from the common pool to cask storage bunkers up on the hill to make room. The transport cask being used for the process of removal from unit 4 is a NFT-22B model transport cask (aka: CASTOR). TEPCO will remove spent fuel from units 1-4 on this schedule:
Spent Fuel Removal:
Unit 4: Underway 2013, assumed to be completed 2014
Unit 3: 2015
Unit 2: 2017
Unit 1: 2017

TEPCO began moving fuel into the cask bunkers in 2012. They have not been clear about how many of these casks will be transferred to the bunkers. Fuel from the common pool has been loaded into casks and sent to the bunkers up on the hill.

As they need to make room in the common pool older fuel can be put into casks and moved to new bunker storage. 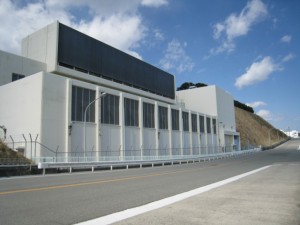 The cask storage building holds a small number of casks and resides near the docks. Casks are intended to then be shipped out to France or the UK for reprocessing rather than for long term storage. With the disaster at the plant and Japan’s fuel reprocessing plan now up in the air, no fuel is being shipped out of Japan.

An interim fuel storage center at Rokkasho has been in the works but was dependent on the completion of a fuel reprocessing facility there. Local agreements tied the two together. Considerable local backlash resulted when the central government suggested ending the reprocessing factory but keeping the fuel storage in Rokkasho. Locals demanded all the fuel casks be sent back to their original location but that has not happened to date.

Fuel Moving Status
As of April 2014 this was the count of spent fuel in each reactor, the bottom table lists the cask facility on the hill, then the common pool. The line in the top table with all zeros is the emptied old cask building. 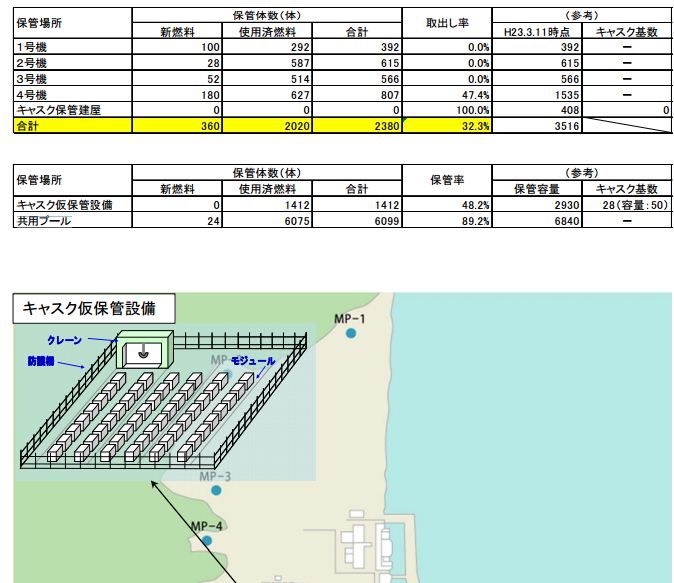