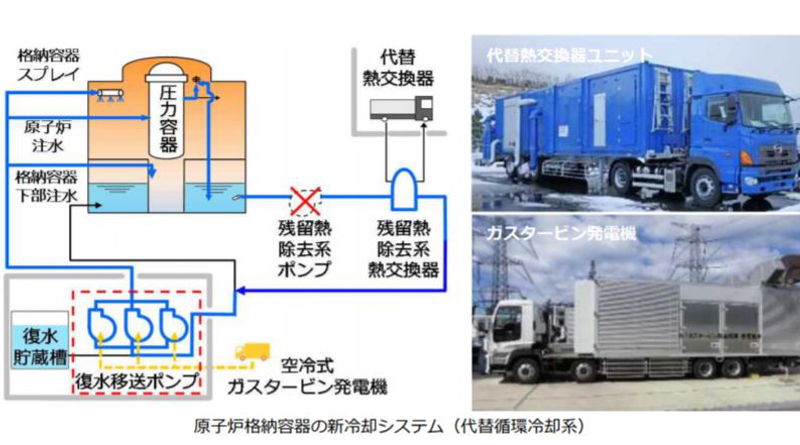 TEPCO recently presented a pump truck concept to Japan’s nuclear regulator (NRA). The company is trying to use this concept as part of the case being made to allow them to restart the massive nuclear power plant, Kashiwazaki Kariwa.

Now TEPCO rolls out their pump truck concept but this seems even more questionable than the filtered vent system as a safety response. 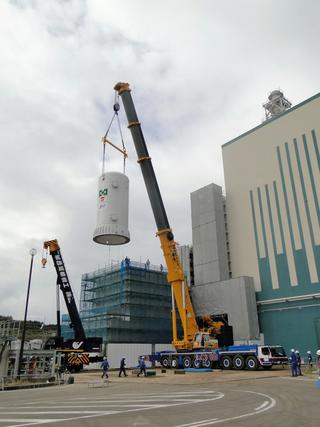 The truck appears to be a riff off of the FLEX pump and generator concept US nuclear operators negotiated as a safety effort to avoid being forced to install filtered vents on their BWR reactors. The FLEX system has been questioned as being insufficient for combating a meltdown due to the pump capacities. Portable pump and fire truck systems may not be sufficient to provide enough cooling water volume or pressure to make headway against a melting reactor core.

Diagram rough translation:
Upper right red X shows the RHR cooling system pump as offline. The blue bullet shaped location is a part of the RHR cooling system that one of the trucks would connect into. This would draw water out of the reactor suppression chamber. It would then return the water in a cooled state to the condensate coolant system. From there pumps for that system would push the water using a 2nd truck into the containment drywell, a containment spray system and possibly directly into the reactor vessel.

The capacity of water these two trucks could pump per minute has not been described in any of the public documentation we have found. This critical factor is what would determine if the system could over come the incredible heat of a reactor meltdown. It is also not clear if the capacity would be capable of sufficiently cooling and condensing steam and pressure build up in containment. If it could not then venting the containment to the environment is the only other option to prevent a massive containment failure.

This concept fails to take into consideration the potential for fuel particles to be sucked into the system from the suppression chamber. Reactor depressurization during a meltdown type accident could purge fuel particles and fuel debris into the suppression chamber. Those particles could then be pulled into this cooling system. This could cause a number of serious problems. There could be the potential of a criticality. This is where nuclear fuel is collected in the right amount and shape to set off a nuclear reaction. The nuclear incident at the Tokai nuclear fuel facility in Japan in 1999 is an example of a criticality accident. Having such a thing happen on top of a reactor accident would be a dire complication. Other potential problems include having a high radiation field build up along the water lines and in the pump trucks being used. It could make the system and trucks too dangerous to approach or could give workers an unanticipated high radiation dose. This system also brings reactor water outside of the existing hardened safety systems. Should a connection or pump truck experience a failure this water could be released outside.

Japan’s NRA is taking public comment on the truck concept this month before they decide if this system will be included in their decision making for a potential restart at Kashiwazaki Kariwa. 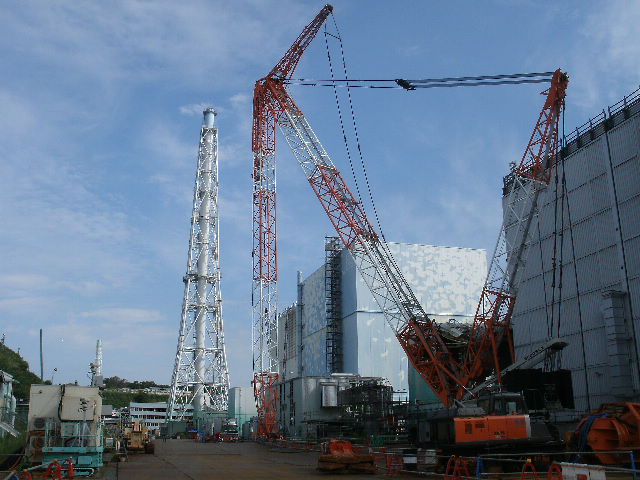