UPDATE:
Typhoon Ma-On downgraded to a tropical storm and looks like it will veer south of Tokyo and go out to sea.
UPDATE:
Newest radar animation
New storm path image, has the storm over Fukuoka and Osaka then tracking just south of Tokyo.  As the storm tracks along the south of Tokyo it will go out to sea then turn north according to the latest prediction.
Osaka web cams to watch
Japan Times info on typhoon potential to hit Fukushima. *the storm doesn’t have to hit directly to do damage, the outer storm is usually quite strong.

“Cape Muroto, Kochi Prefecture. Amazingly, the prefecture has measured 1,000mm of rain over the last 24 hours, the most experienced since records began. ” From Daily Yomiuri

Current web cams in Tokyo show calm and no rain, lots of people out on the streets.

UPDATE:
List of live web cams in Tokyo.
6:45am JST, seems to be raining, plenty of people out on the street.

UPDATE:
It appears the storm may be tracking a bit more north than previously predicted.
Heavy winds and rain are being reported in Tokyo by Time Out Tokyo
New radar image as of  6:30am JST
New image with storm path
Sea forecast as of 7-19 JST
Storm path as of 7-19 JST

The latest as of (7-18-2011 11:30am CST) has typhoon Ma-On around Kyushu with winds  of 144kph. TEPCO is rushing to put a set of panels on the roof of turbine building #3 to cover large holes in the roof. Workers have also disconnected water hoses from the mega-float and began sandbagging to keep water out of certain areas. The typhoon is currently projected to work along the coast and make a right turn about at Tokyo. Even on this trajectory the Fukushima power plant should get a good deal of rain and wind.

The newest radar image as of posting this. 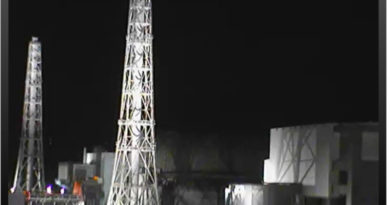 Another Typhoon Headed Towards Fukushima Daiichi