Yesterday’s 5.8 earthquake that shook the eastern US and the near miss at the North Anna nuclear power plant has caused many to stop and look at the true safety situation in the US.

Soon after the Fukushima disaster the US government and the NRC proclaimed that US reactors were safe, touting a “superior safety system”.  What we are quickly finding out is the US has a myth of superior safety rather than a safe system. This is all on the heels of months of anxiety as Ft. Calhoun nuclear station sat surrounded by water. Ft. Calhoun initially had no formal flood plan until the NRC forced them to develop one in 2010. Even then the plan involved sand bags and lots of hope.

The North Anna nuclear plant has a seismic design basis maximum of between 5.9-6.0. Yesterday’s quake was a 5.8 putting the plant very close to the maximum considered before major damage or failure could occur.  Even more concerning is this report that North Anna had it’s seismic detecting equipment removed due to budget cuts.  Reports state that North Anna automatically shut down after losing offsite power, not from a seismic trip.

The removal of the seismic equipment that would shut down the plant appears to be true. We found an NRC report from 2003 that shows the plant shut down on a seismic trip from a 4.2 earthquake. The report also states that North Anna’s reactor systems were set to automatically shut down with movement well below a 4.2 earthquake.

We have contacted Old Dominion Power about the removal of their seismic safety system and have not received a response as of publication. We will update if we receive any comment from the company.

If purposely removing the seismic safety system at a nuclear plant only built to withstand a 5.9 earthquake isn’t concerning enough, the situation with the back up generators and overloaded spent fuel certainly is.

North Anna did their required post Fukushima safety inspection. They failed to mention the removal of the seismic trip system or the over loaded spent fuel pools. They did however mention a number of pieces of critical safety equipment are not able to handle seismic activity.

“Dominion found that portions of the plant’s water and gas suppression systems, hose stations and a pump station are not designed for seismic events.”

As has been seen at Fukushima, watering systems and the ability to deal with explosive hydrogen build up is a critical set of functions in the event of an incident at a nuclear plant.
Dominion claims these admitted problems have been resolved but no details have been found.

The NRC reports that the problem with one of the four emergency generators yesterday was a coolant problem.

“One of the plant’s four diesel generators, which power the reactors’ cooling systems during the blackout, stopped working as a result of a coolant leak, Roger Hannah, a spokesman for the U.S. Nuclear Regulatory Commission, said in an interview”

Part of these post Fukushima inspections was to include reviewing the current status of spent fuel pools. The report to the NRC from North Anna did not address the spent fuel pools at all and so far the NRC has not challenged this omission.

North Anna does have an onsite dry cask fuel storage facility. They are also is storing 4-5 times the fuel the spent fuel pools were designed to hold. The Project on Government Oversight has estimated the following:

A fuel pool fire at North Anna could be devastating.

So there is a pair of reactors on an earthquake fault, on the population dense east coast. These reactors no longer have seismic shutdown equipment due to budget cuts. They are only built to withstand a 5.9 earthquake. They failed to find a damaged generator with two recent inspections to it and they have an overloaded spent fuel pool. 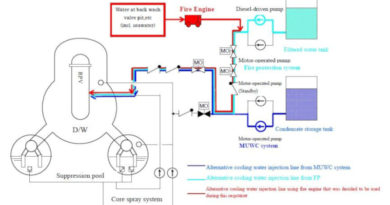 TEPCO To Test Halt Of Water Injection At Fukushima Daiichi