A group of experts released a report on the current situation in Japan and their concerns that some critical lessons of the disaster are not being heeded by officials in the US. They outlined 8 issues that must be addressed to avoid a similar disaster in the US. Below is their statement in their own words:

The following eight concerns and lessons were among those outlined by the speakers:

The U.S. regulatory response since Fukushima has been inadequate. “Six months after Fukushima, it seems clear that the U.S. is not going to undertake the type of fundamental, no-holds-barred look at its nuclear regulatory practices that followed the much less serious accident at Three Mile Island some 30 years ago.” – Peter Bradford

America should avoid post-9/11 mistakes in tightening reactor safety standards. “In responding to Fukushima by issuing orders, the NRC should not make the same mistakes as it did following 9/11, when industry stonewalling delayed implementation of critical security measures for many years. Even today, some post 9/11 security upgrades have not been completed at numerous plants … The worldwide response to the Three Mile Island accident was clearly inadequate to prevent even worse events from occurring. The U.S. must respond to Fukushima in a much more comprehensive way or it may soon face an accident even worse than Fukushima.” – Edwin Lyman

Overall Japanese health dangers are getting short shrift. “The last six months have shown a continued pattern of secrecy, cover-up, and minimization …. (The) news media and some so-called authorities have repeated the false information that doses under 100 mSv (millisieverts) have no health effects. All radiation doses have some effect, particularly when large populations are exposed. The Japanese government’s decision to increase the maximum allowed dose for citizens of Fukushima (including children) from 1 mSv per year to 20 mSv, the equivalent of 200 chest x-rays or the maximum many countries allow for nuclear workers … is unacceptable and remains in place despite vehement public and international pressure.” — Dr. Andrew Kanter

In particular, the impact on the health of Japanese children is being glossed over. “Children are at least three-to-four times more susceptible to radiation than are adults. There are about 350,000 children under 18 in Fukushima Prefecture. If each of these children were exposed to the 20 mSv maximum over two consecutive years, the National Academy of Sciences BEIR VII report would predict 2,500 additional cancer deaths… The upshot is that there is no safe dose of radiation and exposing non-consenting people, especially children, to these increased health risks is medically unacceptable. The Japanese government is not adequately monitoring radiation contamination of soil, food, water, and air and is not providing the parents with sufficient information to protect their children.” — Dr. Andrew Kanter

The U.S. was warned of Fukushima-style problems but failed to act … and is still failing to do so. “U.S. reactors have some of the shortcomings of the Fukushima plants. Furthermore, citizen groups and scientists had tried to call one of these – spent fuel pool vulnerability — to Nuclear Regulatory Commission attention during the last decade. The NRC dismissed these efforts, with one commissioner even ordering the staff to do a review designed to discredit the concerns. The NRC reviews of Fukushima to date are all well and good, but the Commission and the Congress need to face up to the deeper lessons of Fukushima as well. When mishaps occur at nuclear power plants, the NRC requires a “root cause analysis” that gets at the underlying causes as well as the immediate technical problems. Without a root cause analysis of its own failure to heed the now validated warnings about spent fuel pools, the NRC may patch the technical problems revealed by Fukushima, but it won’t fix the underlying shortcomings that allow defects to persist until catastrophic events rather than regulatory vigilance force the nuclear industry and the public to face up to them.” – Peter Bradford

Emergency planning zones in the U.S. must be expanded. “The NRC Task Force report got some things right but others wrong. In contrast to the Task Force conclusions, we believe that emergency planning zones should be expanded, certain hydrogen control measures should be immediately enforced and spent fuel transfer to dry casks should be accelerated. Also, the safety margins of new reactors need to be reassessed.” — Edwin Lyman

The recent East Coast earthquake should spur more NRC safety analysis. “The earthquake near the North Anna nuclear plant, which reportedly exceeded the plant’s seismic design basis, reinforces the urgency of the NRC Fukushima task force’s recommendation that all plants immediately be reviewed for their vulnerability to seismic and flooding hazards based on the best available information today.” – Edwin Lyman

Fukushima is turning out to be much worse than Chernobyl. “Although the Chernobyl reactor explosion was devastating, scattering the majority of its nuclear core across a wide swath of Europe, the Fukushima accident involved three reactors, which underwent meltdowns (or melt-throughs) and four spent-fuel pools that suffered damage. It will take years to measure the total release of radioactive materials into the environment from Fukushima, but we already know that that the immediate releases are now estimated as being twice as high as originally admitted. Some authoritative sources, using releases of radioactive Xenon as a marker, show that the amount of Fukushima Daiichi radioactive fuel that has been damaged/released could be several times that of the Chernobyl release. Another estimate has the equivalent of 168 Hiroshima bomb’s worth of Cesium have been released onto Japan.” – Dr. Andrew Kanter 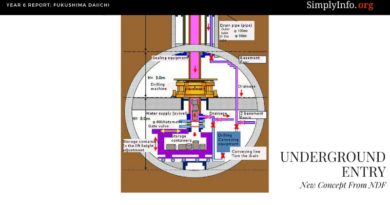 The Semi-Secret Plan To Tunnel Under Fukushima Daiichi