Professor Yukio Hayakawa has developed a following online for his analysis and information related to the Fukushima nuclear disaster. His is a volcanologist, being a similar scientific discipline means he has a scientific understanding of things like dispersal but did not come up in the nuclear industry run university system. People familiar with the university system in Japan claim that the nuclear science programs are heavily funded and run by the nuclear industry.

The president of the university that reprimanded Hayakawa has ties to the JAEA. What seemed to have irritated the university president was Hayakawa’s statement that farmers in Fukushima should not be growing crops this year and also his maps comparing Fukushima to Chernobyl. Hayakawa’s statements have been an annoyance to the Japanese nuclear industry that has been trying to fill mainstream media with their hand picked “experts”.

Hayakawa decided to hold a press conference. The University responded by first refusing to allow him to book a meeting room on campus and then shut off the power to his office while he was meeting with reporters from major media outlets.

Professor Hayakawa’s Chernobyl maps can be found on his blog. He can be found on twitter at HayakawaYukio. His tweets are in Japanese but can be translated using Google Chrome’s translate function, Chrome plugins or the Seesmic twitter program. 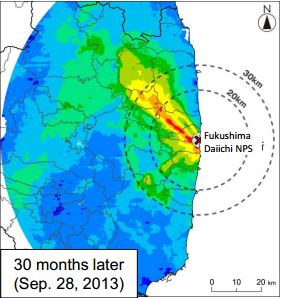