On September 5th hydrogen concentrations in Unit 1 jumped to .54%, the reading the previous day showed 0% hydrogen for Sept. 4th   The 6th showed a .38% hydrogen level, On the 7th hydrogen decreased to .25%.

TEPCO made this statement on Sept. 4th:

– At 10:30 AM on September 4, in order to examine the case of the intermittent increase in hydrogen density and noble gas (Krypton-85) density measured by Unit 1 RCV gas control system, we injected the nitrogen to the upper part of the pressure suppression chamber in which hydrogen is supposed to be accumulated from the nitrogen injection line laid on the 1st floor of reactor building, and pushed out the accumulating hydrogen and the Krypton-85. We accordingly started confirming the presence of hydrogen and Krypton-85 at the upper part of the pressure suppression chamber utilizing the gas control system. At 4:37 PM on the same day, we stopped the nitrogen injection to the upper part of the pressure suppression chamber. The hydrogen density of Unit 1 RCV was 0.54% as a result of this work (as of 11:00 AM on September 5). Since it is below the flammability limit (4%), there is no problem.

TEPCO mentions Krypton-85. Unit 1 has also had Xenon 135 being produced in Unit 1 for a considerable amount of time before the last earthquake and before water levels were lowered last week.

We previously saw these same events in December 2011 where the flame appeared on video at night and related hydrogen purges were going on.

Spontaneous fission is the likely cause for the ongoing xenon problem at unit 1. The abrupt hydrogen increase is more of a concern. The same issue happened before when water levels were adjusted up and down back in Nov-December 2011. TEPCO monitors hydrogen in a couple of locations. This only identifies the hydrogen concentration at that location. It may not show higher concentrations in other areas or very concentrated build up in pipes. These unmonitored hydrogen concentrations can become high enough to create an explosion. The size of such an explosion would depend on the location and size of the concentration. Such an event could prove quite dangerous to the state of the reactor that is already heavily damaged.

TEPCO is taking steps to attempt to bring down the hydrogen concentrations by injecting nitrogen. This TEPCO report cites that it may take 214 hours to purge the hydrogen. As of today the effort seems to be bringing down the hydrogen levels though it is not known if the generation mechanism for the hydrogen is still producing more. The initial jump in hydrogen went from 0% to .54% in a matter of hours. The relationship between watering decreases and hydrogen increases in the reactors indicates another risk in relation to extended pumping or power loss at the plant.

H/T to Fukushima Diary who first noticed the issue. 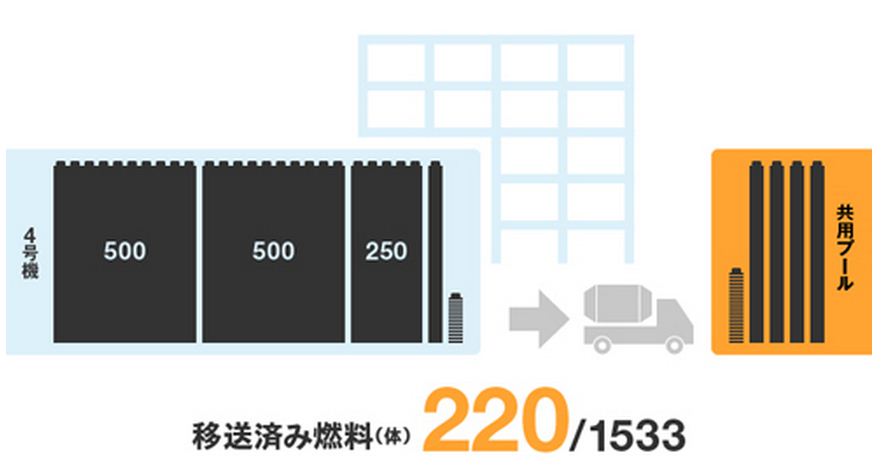