Greenpeace recently released an unedited copy of an NRC flood report that showed the NRC had been routinely lying to the public. While the NRC has been telling the public that nuclear plants in the US are completely safe they knew of credible catastrophic flood risks at four US nuclear plants.

In 2009 the NRC privately told Duke Energy that a dam failure caused catastrophic flood was a credible event. The NRC’s own calculations showed a catastrophic dam failure at the Oconee nuclear plant was more likely to happen than the quake-tsunami induced disaster at Fukushima Daiichi. This credible flood risk was also known for the Ft. Calhoun nuclear plant. For years the only flood plan at the plant was to purchase sand and sandbags. In October of 2010 the NRC issued a yellow finding for Ft. Calhoun stating that their flood defenses were insufficient. The solution by the NRC was not flood gates or permanent flood walls for the plant, it was an instruction for the plant to line up a supplier for sand so they didn’t need to find someone in an emergency.

When the 2011 Missouri river flood hit the plant, sandbags, concrete road dividers and an big rubber dam filled with water were the only plant defenses keeping water out of the plant. The NRC document showed all “floodgates” and sandbags to have flood protection to 1009.5 above sea level. The flood waters peaked at 1008. Ft. Calhoun does not have any sort of floodgates installed at the plant. The NRC flood report document shows that there were many scenarios where flooding would go over the 1009.5  estimated flood resistance of the plant. The NRC had repeatedly told the public Ft. Calhoun was flood resistant to 1014 feet above sea level, this is not in the flood calculations of the plant. They may have been using the rubber dam as their calculation for an additional 7 feet of protection. The rubber dam failed when someone struck it with a bobcat earth mover. Official reports and reports from workers at the plant indicated that water had been seeping into the buildings at the plant.

The NRC knew the risks at Ft. Calhoun and also knew the dam failure odds yet never informed the public. Meanwhile the Gavin’s Point dam upriver was releasing a record 154,000 cubic feet of water per second and in July only has 1.5% of it’s water storage space left behind the dam. The NRC’s own calculations they refused to release to the public showed the Ft. Calhoun plant would have been unable to survive the failure of Gavin’s Point dam.

The NRC report also admits the Oconee nuclear plant would be unable to survive a dam failure. Oconee houses three reactors, putting the region into the same type of threat as Fukushima Daiichi where multiple reactors both complicated the response and intensified the disaster.

The NRC refused to release the report citing security concerns yet the other agencies involved saw no reason to withhold the information in the report. Agency whistleblowers say the NRC simply didn’t want to be caught lying to the public. It seems to be that was the NRC’s motivation, to hide the fact that they had been allowing a very high risk situation to go unaddressed and had been deceiving the public when questions about the risks were asked.

Enformable is reporting another NRC document showing where over 100 emails from the public demanding older reactors be shut down after the Fukushima disaster were simply deleted. The emails were demanding the shut down of plants the NRC is allowing to operate past their engineered life spans. Many of these are identical reactor designs to the Fukushima nuclear reactors. The solution by the NRC’s public affairs office was not to take this public outcry to someone in the agency, instead they simply deleted the demands of over 100 citizens that something be done. Local activists in Nebraska have documented many public meetings where the public had their questions screened and only certain people were allowed to speak.

The last year has seen multiple scandals at the NRC and whistleblower cases where employees in the NRC felt they needed to go public with the corruption going on within the agency. These NRC employees also expressed distrust in the current system to properly investigate the NRC’s misdeeds. 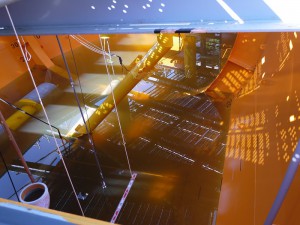 One thought on “NRC Corruption Mounts As New Documents Released”