Woods Hole has begun a project to document cesium contamination levels across the Pacific over time. Samples done to date can be found on their interactive map here:
http://www.ourradioactiveocean.org/

Various California universities and Lawrence Berkeley National Lab are starting a program to monitor sea kelp for radioactive contamination. This new program may help identify changes in the Pacific ocean off the US west coast. The program can be found here:
http://kelpwatch.berkeley.edu/

A 2013 paper by Rossi et al estimated the arrival and concentrations of the Fukushima contamination plume to arrive on North American shores. Their estimates were controversial in some circles but were proven to be highly accurate in both timing and radioactive concentrations.
Study link: https://hal.archives-ouvertes.fr/hal-02296650

Various agencies have done plume modeling estimates. These take weather conditions and releases and estimate where the radioactive releases went or will go.

Data by NOAA and US Navy 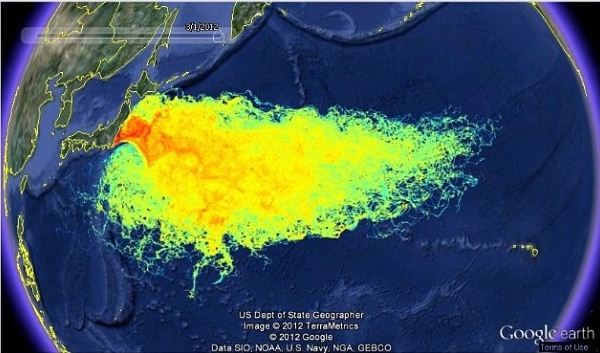 USGS Fukushima fallout deposition over the US (NADP) via Archive.org  http://nadp.sws.uiuc.edu/fukushima/

USGS report on wet deposition fallout on the US from Fukushima Daiichi https://pubs.usgs.gov/of/2011/1277/

Adrift.org sea plume of Fukushima (dead link) http://adrift.org.au/fukushima
* they used the program they also use to model sea trash so disregard the reference to “plastics”
This article in Science Daily talks about their work https://www.sciencedaily.com/releases/2013/08/130828092312.htm
The sea plastics and current program can be found here: http://plasticadrift.org/